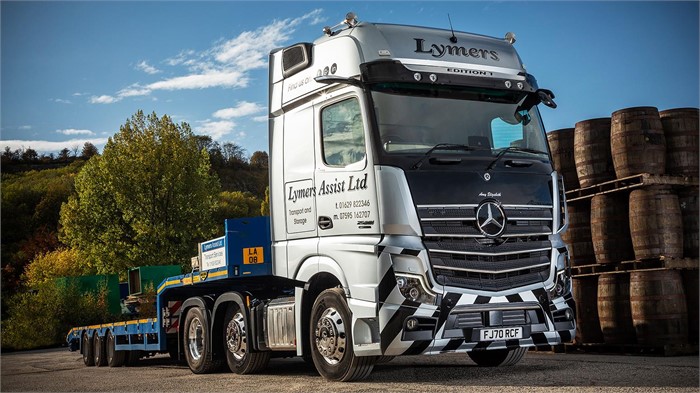 Lymers Assist, a haulage and escort vehicle supplier based in Matlock, Derbyshire, recently purchased its first Mercedes-Benz vehicle, one of 400 fifth-generation Actros Edition 1 trucks. The stylish vehicle is powered by a 15.6-litre, 617-horsepower (460-kilowatt) engine and benefits from Active Brake Assist 5 and Predictive Powertrain Control.

It features a GigaSpace cab with several black or darkened accents on the grille and other components and four LED headlamps on the sun visor. On the inside, the truck has a Multimedia Cockpit with a 12-inch colour display, black leather trim, and a polished aluminium dashboard badge.

“Image is very important to me,” says owner Alex Lymer. “I don’t want basic, supermarket-spec trucks, so most of ours are high-end models that really look the part when they turn up on behalf of our customers.” 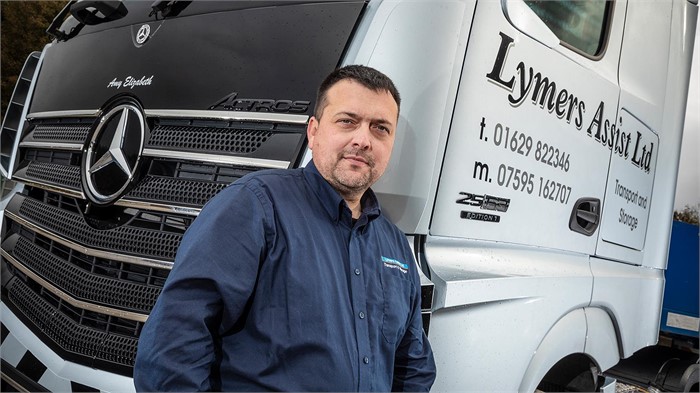 The company’s owner, Alex Lymers, appreciates the truck’s GigaSpace cab and overall style. He says he typically opts for high-end models that will “really look the part,” which he adds is “certainly true of the Edition 1.” (Photo courtesy of Mercedes-Benz.)

Jason Dempsey, who has been with Lymers Assist since June, has 32 years of experience as a driver, and in that time has never once been involved in an accident. He refers to himself as an “old-school driver” and at first wasn’t sure about the MirrorCam system, which replaces conventional mirrors with roof-mounted cameras and A-pillar-mounted in-cab screens to reduce blind spots and improve visibility. However, after some time behind the wheel, he is now a believer in the new technology.

“It took a little bit of getting used to, but I was soon won over,” says Dempsey, who is a fan of the Actros Edition 1 in general. “The blind side view when I’m reversing with a wide load is truly amazing. My Actros is a beautiful machine, and like Alex I love the way it looks. It’s supremely comfortable, and someone’s clearly given a lot of thought to the interior lighting – having so many options when it comes to illumination is a real bonus given the dull and dingy cabs of some of the lorries I’ve driven in the past.”

Although he was skeptical at first, veteran driver Jason Dempsey says he was “won over” by the MirrorCam system. He adds that “the blind side view when I’m reversing with a wide load is truly amazing.” (Photo courtesy of Mercedes-Benz.)

Find Your Next Mercedes-Benz

You will find hundreds of new and used Mercedes-Benz trucks for sale every day on Truck Locator, including a large selection of Actros, Atego, Axor, and Econic models.