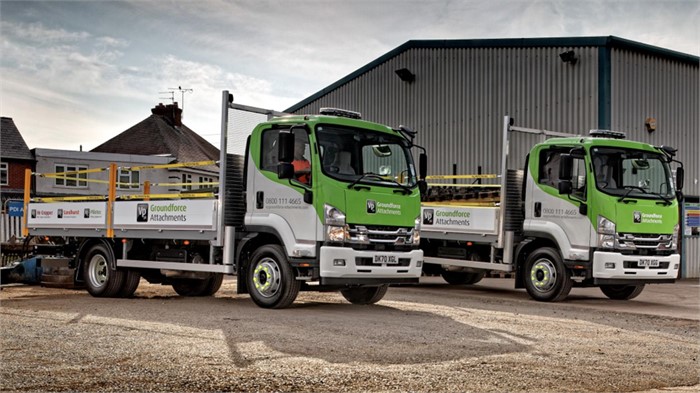 Featuring specialist aluminium dropside bodies and payloads of almost 8.5 tonnes, Vp Groundforce’s latest Isuzu trucks include two new F135.240 (E) 4x2 rigids. The trucks are the first among the firm’s 16 Isuzus in the 13.5-t weight class, and the recent fleet replacement order is also the fourth consecutive for Vp Groundforce since 2014.

“All ongoing ageing non-Isuzu trucks due for disposal in due course will be automatically replaced by new Isuzus going forward,” says David O’Brien, project manager of attachments at Groundforce Attachments.

One of the new Isuzu F135.240 trucks will be working out of the Vp Groundforce branch in Birmingham, whilst the other Isuzu will be based at the company’s Rochester depot in Kent. The firm says that both depots require larger GVW trucks because they service much larger geographical areas than the other Vp Groundforce depots. The new Isuzu 13.5-t rigids are fully Fleet Operator Recognition Scheme-compliant and are expected to cover 40,000 miles (64,374 kilometres) per annum. The specialist aluminium dropside bodies were built by PPS Manchester, increasing the trucks’ payload to around 8.5 t.

You will find a large selection of new and used Isuzu trucks for sale on Truck Locator, including a number of D-Max, N75, and other models.