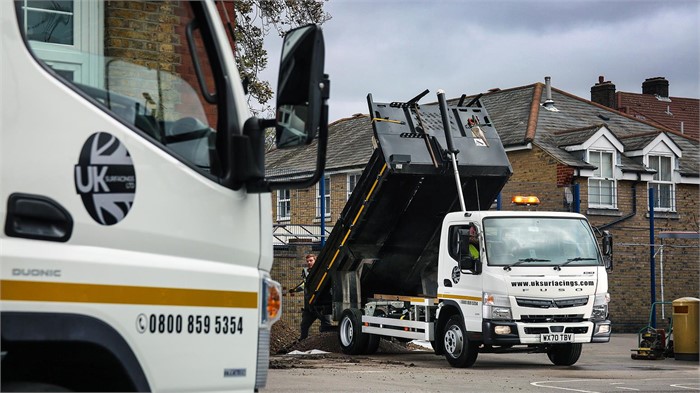 Purchased primarily for their market-leading weight-carrying capacities, the new FUSO Canters are fitted with tipping bodies. (Photo courtesy of Mercedes-Benz.)

UK Surfacings is a family-owned contractor that specialises in asphalt surfacing, often working closely with local authorities and developers on commercial projects, as well as on residential projects. Six years after becoming one of the first customers in Britain for the 8.55-tonne FUSO Canter, the contractor has invested in a new replacement, as well as a 7.5-tonne FUSO Canter as a like-for-like replacement of another FUSO purchased in 2014.

The Payload To Get The Job Done

The 7.5-t Canter features a payload allowance of just under 5 t, which FUSO says exceeds those of more conventional trucks in the same gross weight category by up to 1 t. With an allowance of almost 6.0 t, meanwhile, the 8.55-t Canter is on a par with a 10-t GVW truck in terms of productivity.

“The Canter’s extra payload makes all the difference,” says Tony McVea of UK Surfacings. “The 9C18 will carry just shy of 4.5 t of Tarmac, while the 7C15 takes about a tonne less. Residential driveways often require 8 t of material, so we’re probably sending both trucks to the same jobs a couple of times a week.”

The Canter’s cab-over-engine design on both the 8.55- and 7.5-t models also provides a relatively compact footprint that’s well suited in busy areas and on private driveways. As McVea says, “The Canter is also that bit smaller than most of its competitors and has a brilliant turning circle.”

The FUSO Canter, distributed by Mercedes-Benz Trucks in Europe, is a versatile truck designed for a wide range of applications, including delivery, construction, landscaping, snow ploughing, and much more. Models range from 3.5 to 8.55 t, with chassis load capacities ranging from 1.6 to 6 t. Engine outputs range from 130 to 175 hp (97 to 130 kW), and there are options for manual or automatic transmissions, depending on the model. 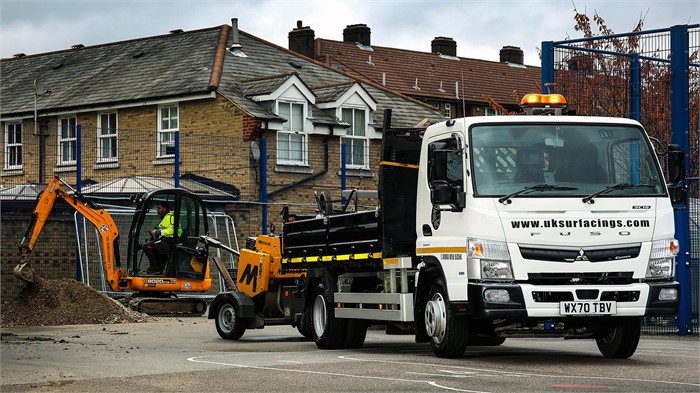 The 8.55-tonne FUSO Canter 9C18 produces 129 kW and up to 430 N-m of torque across a broad engine speed range, and is paired as standard with the six-speed DUONIC fully automated dual-clutch transmission. (Photo courtesy of Mercedes-Benz.)

FUSO offers a 4x4 version of the Canter with all-wheel drive for handling challenging terrain as well as the 100% emission-free eCanter model. The eCanter features an electric motor that produces up to 156 horsepower (116 kW) and 390 N-m of torque. It charges fully in seven hours, with a one-hour fast charge available, and has a range of 62 miles (100 km) with a full payload.

You will find a huge selection of new and used FUSO trucks for sale every day on Truck Locator.