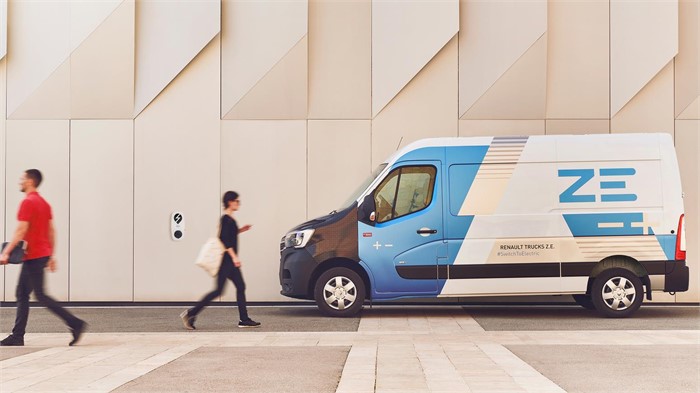 There is now a 3.5-tonne version of the Renault Master Z.E. van available, joining the existing 3.1-t launch model. Despite its higher payload capacity, 3.5-tonner has a maximum operating range of 120 kilometres. (Photo courtesy of Renault.)

Renault Trucks recently announced several new options coming to its medium- and light-duty, all-electric truck and van ranges, including the D Z.E., D Wide Z.E., and Master Z.E. The D and D Wide Z.E., for instance, are now available with 66-kilowatt-hour battery packs. These trucks were originally available with a total of 200 or 300 kWh, but now customers can up that to 400 kWh with six of the new batteries. Renault says a D Z.E. in that configuration has a maximum operating range of 400 kilometres.

The D Z.E. is a 16-tonner with the option for a 4,300- or 5,300-millimetre wheelbase, although Renault does offer “others by request.” It’s powered by a 185-kilowatt (248-horsepower) electric motor that produces up to 425 newton-metres of torque and features a two-speed transmission. The D Wide Z.E. is a 26-tonner and comes standard with a 3,900-mm wheelbase, but Renault offers other options as well. It has two electric motors that produce up to 370 kW (496 hp) and 850 N-m of torque and a two-speed gearbox. With lithium-ion battery packs ranging from 200 to 265 kWh, it has a maximum operating range of 180 km. Both vehicles support 22-kW AC and 150-kW DC charging.

The launch version of the Renault Master Z.E. light commercial vehicle had a gross vehicle weight of 3.1 t, but now there is a 3.5-t version available as well. Even with that increased payload, it can cover up to 120 km on a single charge. The batteries can be fully charged in as little as six hours. 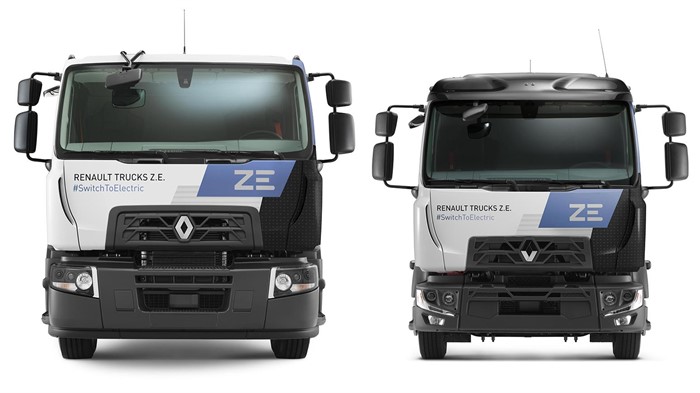 The Renault Trucks D Z.E. and D Wide Z.E. are now available with new 66-kWh battery packs. With six of these batteries, a 16-tonne D Z.E. would have a maximum operating range of 400 kilometres. (Photo courtesy of Renault.)

The 3.1-tonner has three length and two height options in either a van or platform cab configuration, as is the new 3.5-t version. Renault says it will also release platform and chassis cab versions of the Master Z.E. “shortly” that can support tipper trailers, high-volume bodies, and other bodies and equipment.

The Renault Trucks Master Z.E. is powered by a 57-kW (76-hp) electric motor that can produce up to 225 N-m of torque. With 33 kWh lithium-ion batteries chargeable via 7-kW AC charging, the Master Z.E. has a top speed of 100 km/h and a maximum operating range of 200 km on the NEDC (New European Driving Cycle).

Find Your Next Renault Truck

You will find hundreds of new and used Renault trucks and vans for sale on Truck Locator, including a large selection of Range Cs, Range Ts, Midlums, and Premiums.