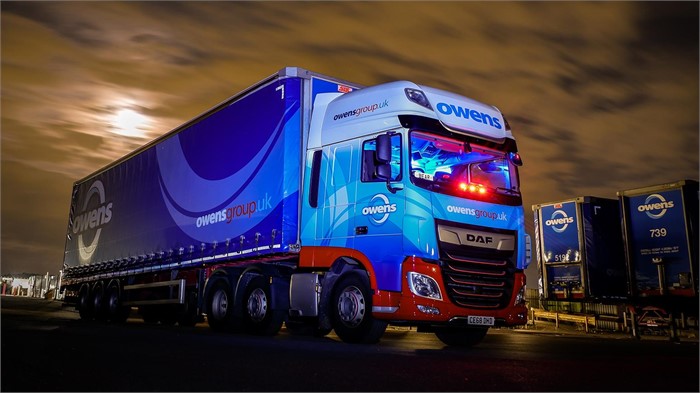 “The DAF XF has established itself in our fleet as a solid, reliable, and very productive truck. It is also very popular with our drivers,” says Owens Group Commercial Director Eurof Owen. (Photo courtesy of DAF.)

Owens Group is one of the largest independent logistics and warehousing companies in Wales, with over 550 vehicles (including vans), 850 trailers, and 185,806 square metres (2 million square feet) of warehousing to support its logistics, pallet distribution, bulk haulage, and delivery fleets. Heavy goods vehicles (HGVs) make up more than 400 of the fleet’s trucks, and with the recent addition of 40 DAF XF 480 6x2 tractors, DAF trucks now comprise more than 25% of the HGVs. The new tractors feature DAF’s FTG mid-lift axle configuration to provide weight savings and allow Owens Group to support greater payload capacities.

“The DAF XF has established itself in our fleet as a solid, reliable, and very productive truck. It is also very popular with our drivers,” says Owens Group Commercial Director Eurof Owen. “The DAF XF 480 delivers on all key operational parameters, including fuel economy where we regularly see an excellent mpg return.” Owens Group also appreciates the support it receives from Watts Truck & Van, which helps the fleet stays in tip-top condition and optimal uptime. “We’ve formed a true partnership with Watts Truck & Van, and I know, with Watts in support, our DAF fleet is fully utilised,” Owen says.

DAF Trucks’ XF range has options for PACCAR MX-11 and MX-13 engines, ranging from 220 and 390 kilowatts (295 and 522 horsepower) that produce between 1,350 and 2,600 newton-metres of torque, as well as 12- or 16-speed TraXon automated gearboxes. The XF features several Eco modes that can either find a healthy balance between performance and efficiency or fully favour reduced fuel consumption with gear shifting at lower revs, among other adjustments. In addition to the Super Space Cab, the smaller Space cab is available, and axle configuration options include 4x2, 6x2, 6x4, 8x2, and 8x4.

You will find more than a thousand new and used DAF trucks for sale on Truck Locator, including a large selection of CFs, LFs, and XFs.