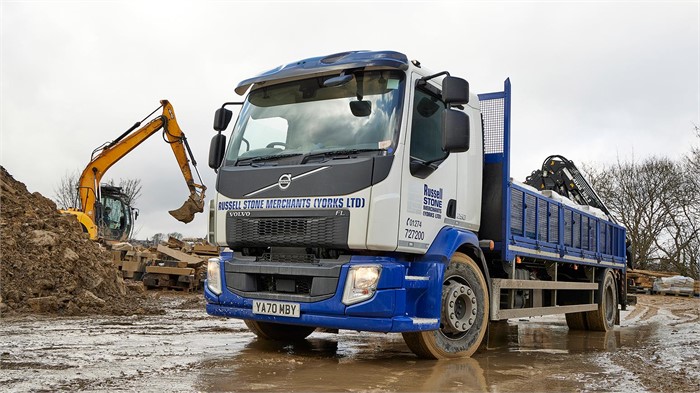 Russell Stone Merchants, a high-quality stone supplier based in Bradford, recently added the first Volvo to its fleet, a Volvo FL crane truck. The 18-tonne (19.8-U.S.-ton) 4x2 rigid has replaced a truck that was in operation for 12 years. “This is no doubt a step up,” says Technical Director Paul Jackson.

That’s important because this is Russell Stone Merchants’ only vehicle; the firm chose the FL after comparing models from four marques. Ultimately, the company went with the Volvo based on its payload capacity and fuel efficiency. The truck is covered by a Volvo Gold Contract repair and maintenance agreement.

The stone supplier’s new Volvo FL features a D8K engine rated for 250 horsepower (186 kilowatts) and up to 950 newton-metres (700 pounds-foot) of torque paired with an I-Sync six-speed automated transmission and steel suspension. The company upgraded the cab with the Drive Package on the interior, which adds cruise control, an electric roof hatch, and air conditioning, and spec’d the truck with amber beacons atop the roof. The truck also features an Atlas 105.2 crane and Mirca Truck Bodies dropside bodywork.

The Right Truck For The Job

“We go up as far as Berwick maybe once every couple of weeks, but the majority of the work is closer to home,” Jackson says. “Business is very busy at the moment and most days the truck will go out at its full capacity. We put the crane on the back of the truck, which gives us a bit more length to get the pallets on, and we specified a lightweight body, to maximise payload potential. The driver absolutely loves the truck. It’s looking like an excellent choice so far and in the long run we’re confident the investment will prove great value for money.”

Find Your Next Volvo

You will find hundreds of new and used Volvo trucks for sale every day on Truck Locator, including a large selection of FLs, as well as FHs, FMs, and FMXs.