Volvo FH Scoops the Truck of the Year Award

It's red carpet time in Tinsel Town, with the stars lining up to be honoured or disappointed at the Golden Globes, Oscars, Grammys and Emmys. The truck industry, of course, has its very own awards and one star is cleaning up. Take a bow, Volvo FH. With the International Truck of the Year 2014 award tucked safely away in the cab, the FH is going on to land a slew of other honours. The truck's innovative driver-friendly technologies have been hailed as 'game-changing' and awards committees everywhere in the UK and beyond have responded by handing out the statuettes to the FH. 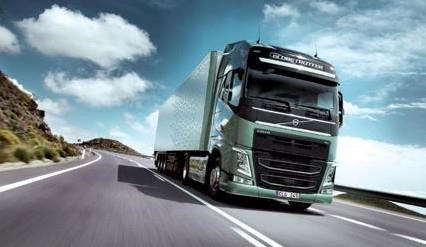 Northern Ireland's top trade magazine, Export and Freight, was first off the blocks with the 'Irish Fleet Truck of the Year' award going to the Volvo FH. The award was collected not be the FH itself, but by Volvo's Retail Development Director, Gerardo Montoya. The party didn't stop there, however, and simply moved to the Irish Republic, where Fleet Transport magazine handed over the sought-after 'Irish Truck of the Year' award. At this glamorous event, the trophy was presented by the Taoiseach himself, Enda Kenny, reflecting the status of this important award.

Volvo followed this up by winning the GreenFleet 'Large Goods Vehicle Manufacturer of the Year' for the sixth year in a row. These awards recognise Volvo's contribution to building more environmentally friendly trucks and encouraging innovation in green technologies throughout the industry. The award was presented by Jonny Smith, a presenter on Channel 5's Fifth Gear programme. The award was given in recognition of the fuel-saving and environmental features on the new FH. As the Christmas trees went up and letters were sent to Santa, the FH had one more present on its list. Scotland's most respected haulage magazine, Transport News, made that wish come true by granting the Volvo FH the title of 'Top Truck 2014'. The selection panel hailed the new FH as being head and shoulders above the competition, making their choice both simple and unanimous.

It is clear that the Volvo FH is the recognised standout truck as we move into 2014. The market has responded positively to its innovations and given the truck rave reviews. Volvo would go as far as calling the FH 'revolutionary' and the truck's success has been hailed by Volvo's UK Managing Director, Arne Knaben, as setting a new standard in the market. He responded to the glittering trophy cabinet being assembled by the Volvo FH by saying that the industry was now recognising the new benchmark set by the FH for trucks operating in the UK and Ireland. He promised that the FH's innovations would soon permeate throughout the range, making the Swedish giant more competitive than ever. The Volvo FH, meanwhile, may well need all of its considerable pulling power to carry off its collection of trophies.