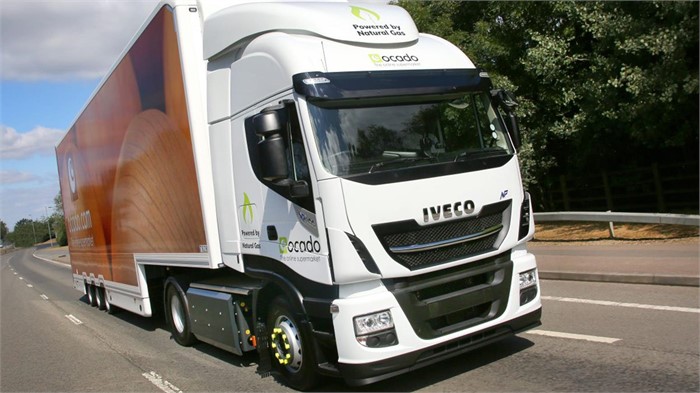 IVECO recently fulfilled the largest ever single-fuel gas-powered truck order in UK history. Ocado, an online supermarket, purchased 29 IVECO Stralis NP compressed natural gas (CNG) trucks, five of which will get to work right away at the company’s customer fulfilment centre (CFC) near Tamworth, Staffordshire, England. Ocado is also working Gasrec to install a natural gas refueling station at its Hatfield CFC, which is when the other 24 trucks from the order will join the fleet and bring the total to 147 vehicles. 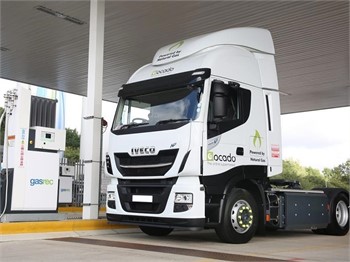 Ocado also hired Gasrec to build a dedicated refueling facility at one of its customer fulfilment centres. (Photo courtesy of IVECO.)

"We were immediately attracted to the Stralis NP when it was launched as it appeared to be the step change in technology that would drive gas powered trucks to a new place in the market,” says Stuart Skingsley, head of fleet for Ocado. “The green credentials of this vehicle are clear, and once we had reviewed the fuel costs against our existing diesel fleet it was clear there was also a cost benefit to running these cleaner, quieter vehicles."

All of Ocado’s new IVECO Stralis NP trucks sport the Cursor 9 Euro VI natural gas engine, which produces up to 400 horsepower and 1,700 newton-metres of torque. But the main benefit of these vehicles is that they produce 50 percent lower NOx emissions, 95 percent lower particulate matter even when compared to the limits set out by Euro VI, and 95 percent lower CO2 emissions when running on compressed biomethane fuel.

Each truck has eight fuel tanks that provide a range of up to 600 kilometres, and you can achieve fuel savings of up to 30 percent compared to diesel. Gasrec’s dedicated refueling facility will make it that much easier for Ocado’s fleet to fill up its tanks.

If you’re currently looking for used IVECO trucks for sale, you’ll find plenty to choose from on TruckLocator, including many nearly new IVECO Stralis models.