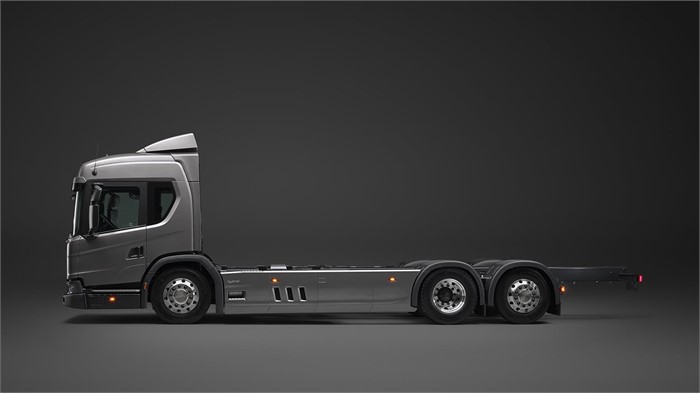 Scania’s L-series plug-in hybrid electric truck is equipped with a DC09 five-cylinder engine that can run on Hydrotreated Vegetable Oil (HVO) or diesel, as well as an electric motor that produces 177 horsepower and 1,050 newton metres of torque. (Photo courtesy of Scania.)

Scania is showing off its entire lineup of next-generation trucks at this year’s IAA Commercial Vehicles trade show, which runs from 20 to 27 September in Hannover, Germany. The event takes place every other year and attendance for this year’s show is expected to be around 250,000. Scania has a wide range of vehicles on display, including trucks and buses, some of which are more traditional and others that are plug-in hybrids or run on alternative fuel sources.

Take It All In

Scania’s L-series plug-in hybrid truck designed for urban applications is on display at the show. The company is complementing it by highlighting the usefulness of Scania Zone, which takes advantage of geo-fencing zones to help drivers adhere to local regulations regarding speed limits, emissions standards, and noise level restrictions. On the other end of the spectrum, Scania’s R-Series and S-Series trucks are at the show to highlight the company’s long-haul models.

Other trucks include an XT model in an 8x4 configuration with a 450-horespower engine for construction work, Scania’s innovative hybrid electric vehicle (HEV), a CrewCab fire truck, and a forestry truck. The company also has its full range of buses and coaches on display at IAA 2018, including a battery-powered Scania Citywide model and a Scania Interlink Medium Decker (MD) coach, which is the first vehicle of its kind to run on liquefied natural gas (LNG) and has an operating range of up to 1,000 kilometres.

At The Show Or At Home

If you plan to attend IAA 2018, you’ll find Scania at Stand C 22 in Hall 12. However, if you’d like to keep up with some of the news at home, you can watch Scania’s IAA 2018 press conference on the company’s website.

For those interested in buying into the brand, there are hundreds of used Scania trucks for sale at TruckPaper, including nearly new Scania R-Series and S-Series models.