Scania Helps TvNo Clean Up & Clean Up Its Act 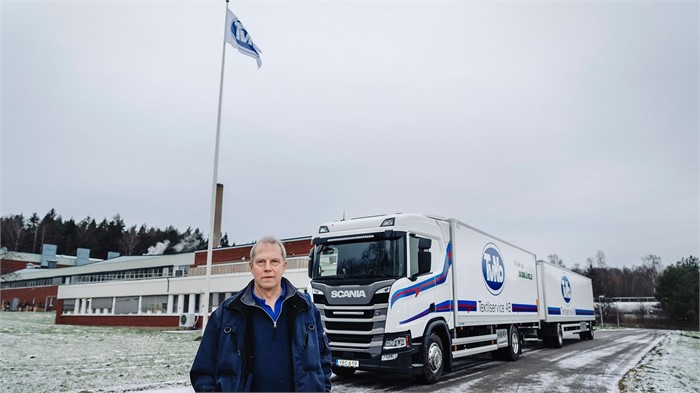 One of TvNo’s new trucks, a Scania R 450, is driven by Stefan Karlsson, who will use it to deliver around 19 tonnes of clean textiles to healthcare facilities in Sweden. (Photo courtesy of Scania.)

TvNo Textilservice, a laundry service company based in Norrköping, Sweden, recently replaced its older Scania vehicles with new trucks, including an R 450 model. The R 450 is powered by a 13-litre Euro 6 engine that produces 450 horsepower and up to 2,350 newton-metres of torque. A major selling point for TvNo was being able to advance its company-wide decarbonisation efforts by investing in Scania trucks that can run on hydrotreated vegetable oil (HVO), rapeseed methyl ester (RME), and other biodiesel fuel sources.

“We took a major step five years ago when we got rid of our oil-based heating system in favour of a pellets system both for water and heating,” says Henrik Möller, head of production and marketing for TvNo. “It’s turned out to be a good investment and has reduced costs.”

On a typical day, TvNo cleans around 19 tonnes of textiles from healthcare facilities, including hospitals, primary care centres, and dental offices in the regions of Jönköping and Östergötland. Drivers then get an early-morning start delivering those textiles before coming back with roughly the same amount for cleaning. This includes pillows, blankets, scrubs, gowns, and much more.

One of the company’s drivers, Stefan Karlsson, recently received a new Scania R 450, his fourth and last Scania vehicle in 33 years of operation, as he soon plans to retire, and so far he has noticed quite a few improvements over previous models. “There’s a world of difference compared to the previous model, especially in comfort,” he says. “It’s so quiet that you feel like you’re in a coach.”

It is still early days yet, but TvNo is seeing a fuel consumption rate of 28 litres per 100 kilometres after three weeks. Karlsson notes that with the help of Scania services and the performance of the truck itself, he gets to play a part in reaching that figure. “I try to follow the advice I get from the Driver Assistance system but after so many years it’s difficult to relearn,” he says. “The truck does most of the work.”

You'll find hundreds of used Scania trucks for sale on this site, including several R 450 models.