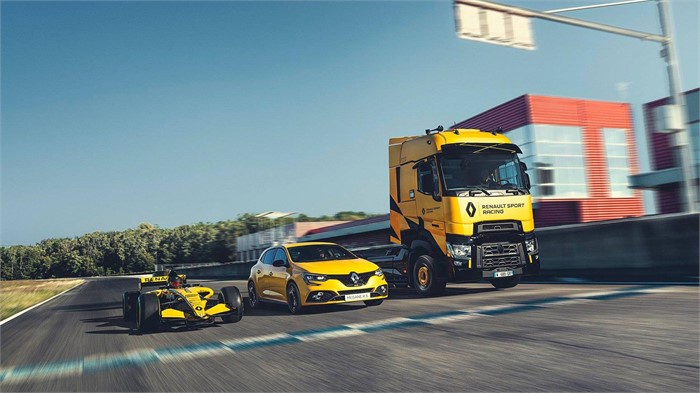 The entire Renault Sport Racing lineup will be on display at Truckfest 2019 In Peterborough, including the R30-02 F1 car, Mégane R.S. 300 Trophy, and Range T520 High Sport Limited Edition. (Photo courtesy of Renault.)

At Truckfest 2019, which takes place 5 to 6 May at the East of England Showground in Peterborough, attendees will get a first look at the Renault Sport Racing lineup. An R30-02 F1 car, Mégane R.S. 300 Trophy performance hatchback, and Range T520 High Sport Limited Edition truck, all of which sport the F1 Renault Sport Racing team Sirius yellow paint colour and Renault Sport livery, will be on display at Stand L1. The company will also have a Master High model on display complete with a curtainsider body and crew cab with a single bunk, night heater, TV and DVD player, ample storage, and over two metres of standing height.

The Range T520 High Renault Sport 6x2 is one of only 100 limited-edition models, and one of 10 6x2 versions produced by Renault. The 44-tonne truck features a 13-litre, 520-horsepower DTi engine and a 12-speed Optidriver automated transmission. Inside the cab, you’ll find a flat floor with plenty of space and driver comfort features. It also has several limited-edition design elements, including leather upholstery with yellow stitching on the inside and triple-coat paint on the exterior. Other highlights include a yellow and black checkered livery, a limited series black ID plate, and painted black wing mirrors, diamond logo, and radiator grilles.

The R30-02 F1 car features a Renault RS27-2010 2,400cc V8 engine and a seven-speed semi-automatic titanium gearbox. It weighs only 620 kilograms with the driver and Renault says it “has raced at eight Grand Prix, placing 6th at Yas Marina with driver Vitaly Petrov, and 8th at Monza with Robert Kubica.”

You can find a large selection of used Renault trucks for sale every day on TruckLocator, including a number of Range T models.