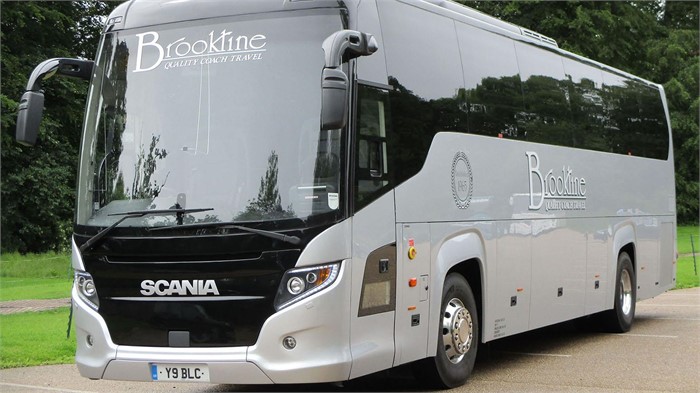 Scania’s newest Touring HD model is 10.9 metres long and has a capacity of 42 seats with a rear toilet and 45 without. (Photo courtesy of Scania.)

Scania recently unveiled the newest iteration of its Touring HD coach, which is 10.9 metres long and has a maximum capacity of 42 with a rear toilet and 45 without. The 9-litre, 360-horsepower bus features Kiel Avance 1020 passenger seats with leather head pads and piping as well as three-point seatbelts, seat back tables, USB chargers, a DVD player, and Bosch Smart Series audio equipment. Each bus also comes with a two-year repair and maintenance package and access to fleet management service data.

The new, shorter Touring HD model follows in the footsteps of the original 13.7-metre, 57 to 59-seat Touring, first introduced in 2009, and the more recent 12.1-metre model, which has a 51-seat capacity with a toilet and 53 without.

“We are delighted to announce this new shorter-length Touring coach, which will enter a market segmentation that is growing in demand,” says Lee Wale, UK retail sales manager for Scania. “The coach utilises the full-size Scania K 360 IB chassis, which is standard on the 12.1-metre version of the Touring and which many operators favour for its reliability, high level of specification, and fuel efficiency. We have initially placed an order for a batch of 10 vehicles. These will arrive in the UK late May 2020 and we are already taking orders for them from customers.”

Find Your Next Bus Or Truck

You will find a large selection of used Scania vehicles for sale every day on TruckLocator.