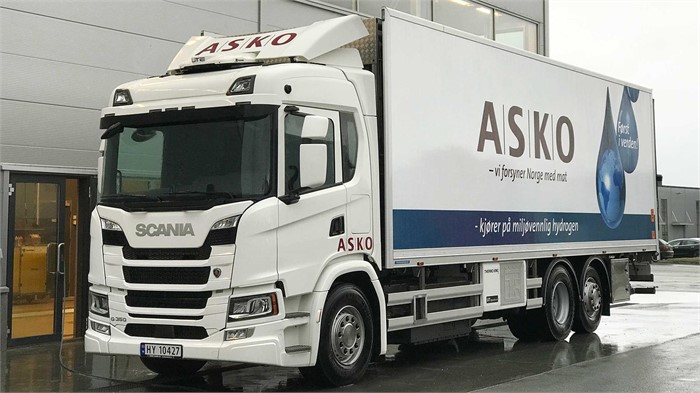 ASKO, a grocery wholesaler based in Oslo, Norway, recently put four Scania hydrogen fuel cell-powered trucks into operation and opened a hydrogen refuelling station in Trondheim, Norway. Each of the trucks features what Scania refers to as “an electric machine,” or motor, in place of a traditional combustion engine. The powertrain consists of rechargeable batteries that feed hydrogen into the fuel cells that power the electric motor. Scania points out that “the rest of the powertrain is composed of the same standard components used in hybrid trucks and buses that Scania already delivers.” The four trucks are entering operation as part of a pilot programme where both companies will gain valuable insights that can be applied to future solutions.

“Scania continues to work with cutting-edge technology that supports the shift to fossil-free transport. An important part of this is done together with some of our most progressive partners, such as ASKO, in customer-near development,” says Karin Rådström, head of sales and marketing at Scania. “Hydrogen gas is an interesting option for long-haulage electrified transport, and early tests show that the technology also works well in colder climate. We will continue to monitor the performance of these trucks closely. I also want to commend ASKO for taking early and bold steps to ensure a supply of hydrogen sourced from renewable sources and infrastructure for fuelling.”

You will find hundreds of new and used Scania trucks for sale every day on TruckLocator, including a big selection of Scania rigid box trucks.