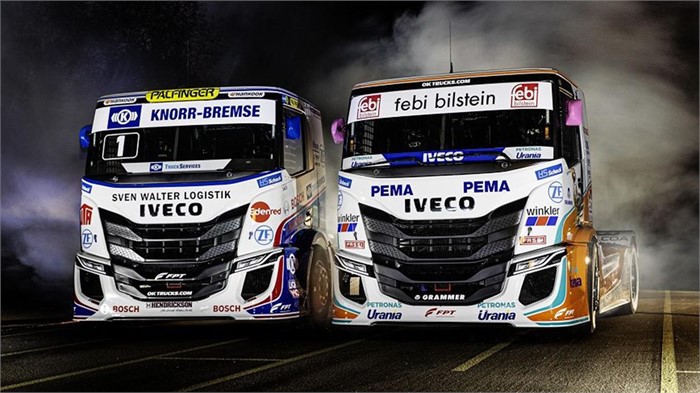 IVECO recently delivered new IVECO S-WAY R racing trucks to Jochen Hahn of Team Hahn Racing and Steffi Halm of Team Schwabentruck to kick off this year’s racing season. Both drivers had the opportunity to drive their trucks around a test track located at IVECO’s manufacturing and R&D facility in Ulm, Germany. Although the event on 16 May was sparsely attended due to the COVID-19 pandemic, IVECO streamed the proceedings on its Facebook page to give people an opportunity to see the trucks in action.

A Long Time In The Making

IVECO put five months of engineering work and testing into these racing trucks, which are based on the recently launched S-WAY that features “optimised aerodynamics that reduce the Cx drag coefficient by as much as 12% and deliver up to 4% fuel savings,” IVECO says. Those features come in handy on the race track even more than they do on the road.

Six-time European truck racing champion Hahn says his IVECO S-WAY, nicknamed “Giulia,” is “with no exaggeration, the best and the most stylish racing truck that we have ever produced.” Schwabentruck driver Halm concurs, but says, “When it comes to the colours, my truck is by far and away better-looking than Jochen’s, although I suppose that doesn’t matter too much this season, seeing as he’s only going to see it from behind!”

You will find hundreds of new and used IVECO trucks and vans for sale every day on Truck Locator, including popular Daily, Eurocargo, Stralis, and Trakker models.