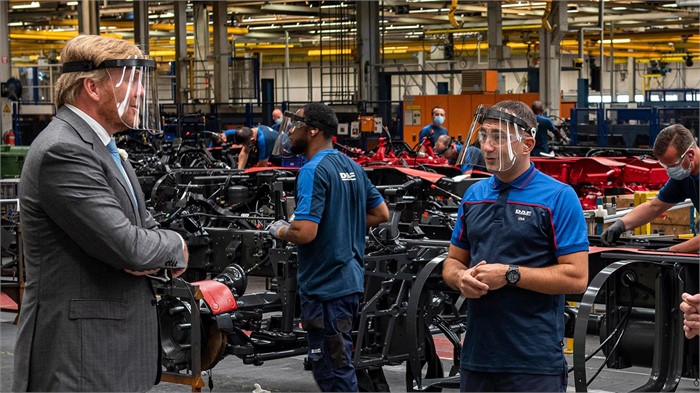 His Majesty King Willem-Alexander of the Netherlands talks with employees at the DAF Trucks factory in Eindhoven. (Photo courtesy of DAF.)

DAF Trucks in Eindhoven received a visit from His Majesty King Willem-Alexander of the Netherlands on June 25 to see how the company has fared through the shutdown and recent restart of operations during the pandemic. DAF President Harry Wolters briefed the King before His Majesty visited with employees at the truck factory to discuss adjustments made to production and how they have affected the workers’ daily activities. The King also participated in a roundtable discussion with leaders in the Dutch automotive industry on the consequences the crisis has had on their sector from the abrupt closures to resumption of production with modifications for safety. 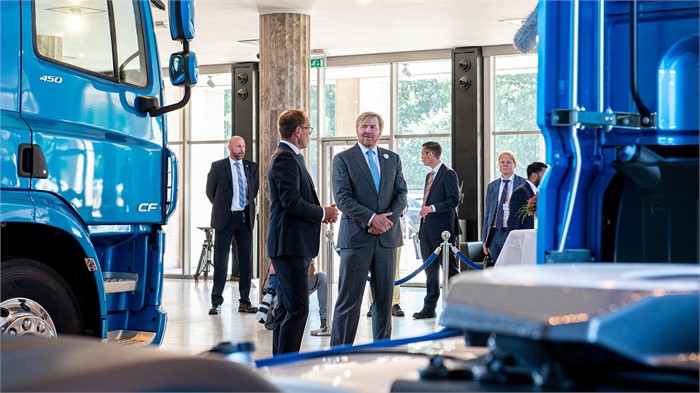 DAF Trucks received a visit from His Majesty King Willem-Alexander of the Netherlands at its production facility in Eindhoven. (Photo courtesy of DAF.)

“It was a great honour to welcome King Willem-Alexander here. We greatly appreciate his interest and concern,” says Wolters. “In particular, it represents highly deserved recognition for our employees, who over the past few months have contributed enormously to creating a working environment in which we can continue to manufacture our fantastic trucks in a safe and healthy manner, entirely according to the current guidelines. That’s something we are very proud of!”

You’ll find hundreds of new and used DAF trucks for sale every day on Truck Locator.