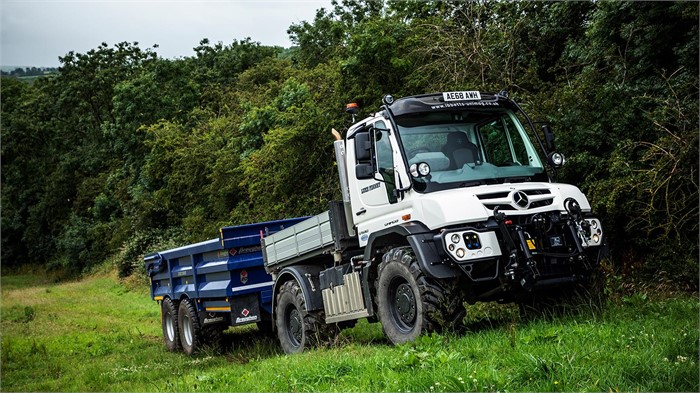 The Mercedes-Benz Unimog is famous for its extreme cross-country capabilities. (Photo courtesy of Mercedes-Benz.)

Leicestershire-based agricultural and equestrian contractor Luke Finney has fallen in love with his new Mercedes-Benz Unimog U530. Not only can the dropside workhorse cross practically any terrain, it can also reach speeds of up to 56 mph (90 km/h) on the roadway.

“If I’d known Unimogs were this good I would have bought one years ago,” Finney says. “Having experienced the vehicle’s amazing range of abilities, I can’t understand why anyone in my line of work would choose anything else. There’s no turning back now.” 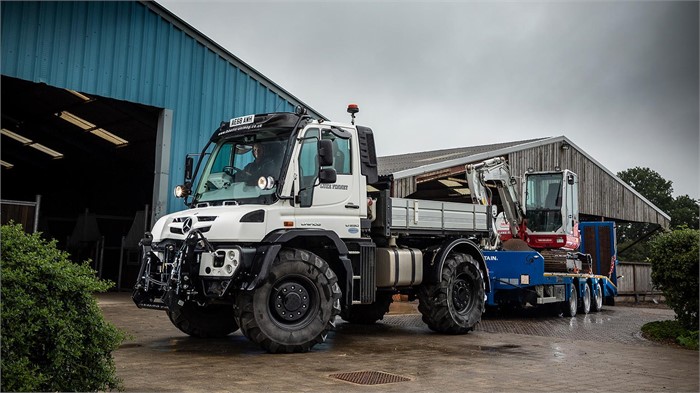 Going Where The Work Is

Since 2006, Finney has specialised in groundworks and building contracts for rural businesses, individuals, and farms in the Leicestershire area. He has four full-time employees and often brings subcontractors on board as projects demand. Finney uses his compact, powerful Unimog to haul a Broughan dump trailer as well as his Takeuchi TB290-2 excavator and other equipment on a Chieftain tri-axle low-loader. It can tow trailers at gross train weights of up to 36 tonnes.

“The Unimog is a fantastically versatile piece of kit. It can tow any equipment I need to move around, while its own load bed with dropsides is ideal for carrying tools and other gear,” says Finney. “All my equipment is the best available, and the Unimog is definitely a case in point.” 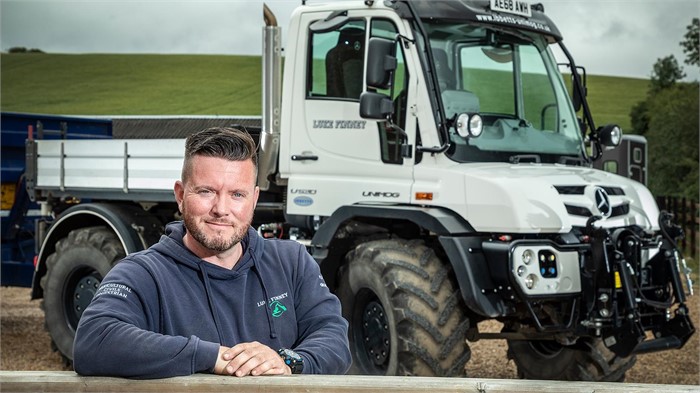 “If I’d known Unimogs were this good I would have bought one years ago,” Finney says. (Photo courtesy of Mercedes-Benz.)

Mercedes’ all-wheel-drive Unimog has been an icon for more than 70 years. Its unusual name is derived from "Universal-Motor-Gerät," or universal motorised device. The 4x4 vehicle has single rear wheels and gross weights of 7.5 to 16.5 tonnes. Its two main forms are an implement carrier with attachment points at the front, side, and rear, and a more torsionally flexible, highly mobile version that can be equipped with various truck bodies.

The U530 chosen by Finney has a 299-horsepower (220-kilowatt), 7.7-litre, six-cylinder engine rated for 1,200 newton-metres of torque. Its transmission is a 16-speed, electro-pneumatic unit. Traction is assisted by differential locks on its uprated portal axles and an optional Central Tyre Inflation (CTI) system. The latter can not only partially deflate the tyres to increase the sizes of their contact patch with the muddy ground, but also to spread out their ground pressure to minimise damage to the turf. 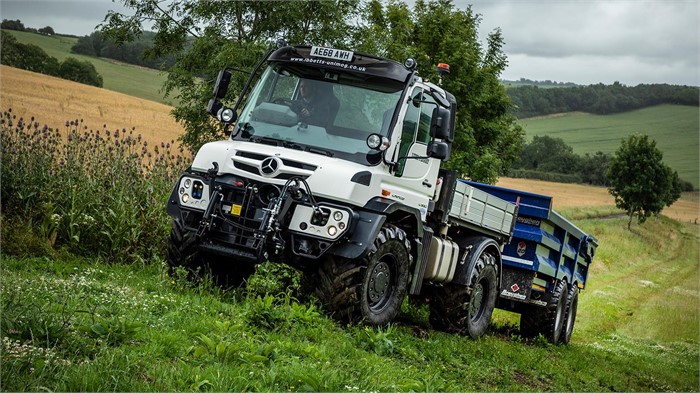 Other features of Finney’s U530 include front and rear cameras, lights, electrical jacks, and hydraulic connectors, as well as a front implement plate and beacons mounted on the roof. The Unimog also includes the VarioPilot feature, which lets the operator slide the steering wheel and instrument cluster from the right to left side of the cab and vice-versa.

Truck Locator has a variety of advertisements for new and used Mercedes-Benz trucks for sale, including an ever-changing variety of Unimogs.