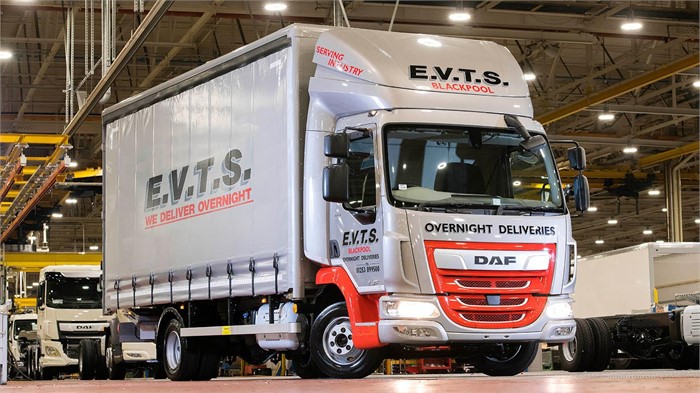 Leyland Trucks, a commercial vehicle manufacturer based in Lancashire, recently produced its 200,000th DAF LF chassis, a 7.5-tonne (8.3-U.S.-ton) LF City 170 with a PACCAR curtainside body. Leyland Trucks first started producing LFs in 2001. Since then, the model has won multiple awards, including International Truck of the Year in 2002 followed by several Fleet Truck of the Year awards.

The milestone LF is powered by a 3.8-litre Euro 6 PACCAR PX-4 engine that produces 170 horsepower (127 kilowatts) and up to 600 newton-metres (443 pounds-foot) of torque, and features a five-speed manual transmission. It is one vehicle in a larger order consisting of two more 7.5-t LF City rigids, four XF tractor units with Super Space Cabs, and two CF tractor units, all destined for Blackpool-based EVTS, a pallet transport company with 32 DAFs in its 35-vehicle fleet.

“We are, of course, very proud to have reached this important landmark in the history of not only the LF product, but also of Leyland Trucks,” says Brennan Gourdie, managing director of Leyland Trucks. “The milestone represents the excellent characteristics of the truck itself and is also a reflection of the industry-leading quality of our 1,000 dedicated employees who deliver to our worldwide customers every day.” 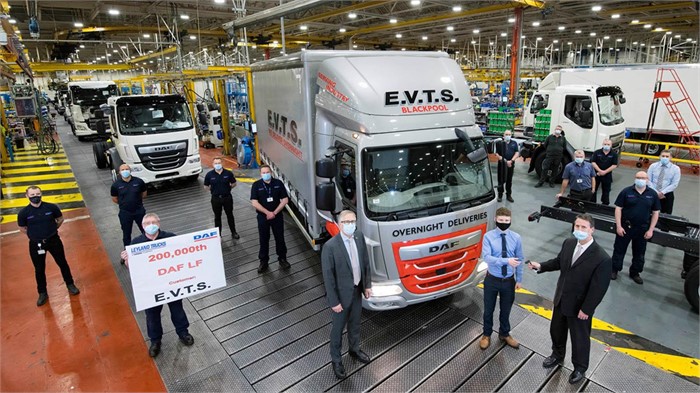 The milestone truck is destined for Blackpool-based EVTS, a dedicated DAF customer with a 35-vehicle fleet, 32 of which come from the Dutch marque. (Photo courtesy of DAF.)

The LF City stands alone as a distinct configuration intended for urban operations. It features large mirrors and windows for improved visibility as well as the option to add a kerb view window to the passenger door. Standard Lexan headlamps and the option for LED rear lights further enhance visibility. It also has a lower cab floor and a door that opens up to 90 degrees for easier entry and exit. All LFs also feature chassis designed to support a wide range of bodywork, making it an ideal platform for bodybuilders.

You will find more than a thousand new and used DAF Trucks for sale on Truck Locator, including a large selection of CFs, LFs, and XFs.