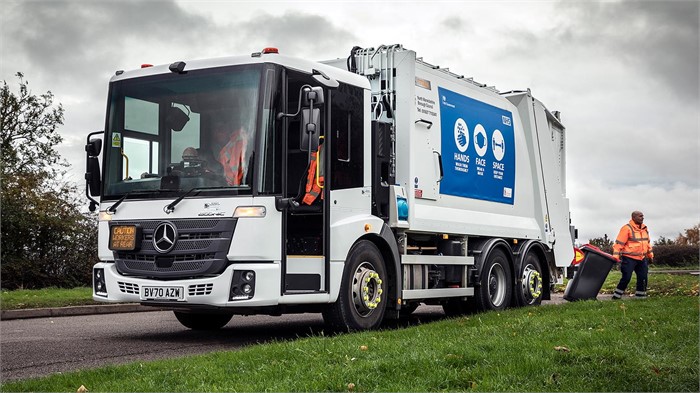 The North Warwickshire Borough Council recently added three Mercedes-Benz Econic 2627Ls to its fleet, all of which were outfitted as refuse collection vehicles by CP Davidson & Sons (CPD) of Chorley, Lancashire. The council is highly familiar with the marque, as 12 of its 16 municipal trucks are Econics. The three latest additions are powered by 7.7-litre, 268-horsepower (200-kilowatt) engines and feature Allison six-speed automatic transmissions and rear-steer axles.

Each new Econic features a Titan XLS body with a capacity of 19 cubic metres (25 cubic yards) and Terberg split bin lifts. The bodywork has a compaction cycle of 14 seconds and only requires 890 rpm from the engine, which Mercedes-Benz says can reduce fuel consumption by up to 15%. It also only produces 75 decibels, making it a quiet solution for urban operations.

The trucks serve as a reminder to be safe during the COVID-19 pandemic; they have hand sanitiser dispensers inside the cab and their bodies display messages for citizens of various towns and villages “to protect themselves and others by observing pandemic protocols,” Mercedes-Benz says.

Mercedes-Benz Econics offer enhanced visibility thanks to a wraparound windscreen, low seating position, and glazed doors that make it easier for operators to see other drivers as well as pedestrians. North Warwickshire’s trucks also feature Active Brake Assist 4 emergency braking, a Blind Spot Camera System with multiple cameras and a 7-inch viewscreen, and Sideguard Assist. Sideguard Assist complements other visibility-related features of the Econic by using radar to detect pedestrians, cyclists, and vehicles on the passenger side of the truck. Upon detection, the system sends audio and visual alerts to the driver. 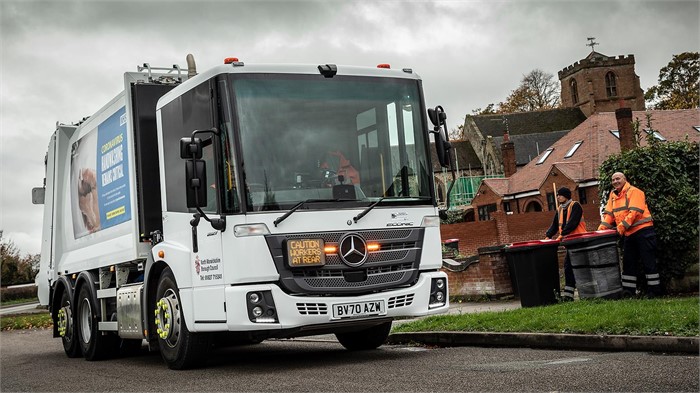 “Given our Duty of Care, it’s reassuring to know that the vehicles we’re sending out each day are so well equipped to protect not only the colleagues who use them, but also other road users,” says John Rhodes, waste and transport manager for the North Warwickshire Borough Council.

“As for the crews themselves, they love their Econics. Apart from providing excellent visibility, the cab is air-conditioned and roomy with lots of storage space, while the fact that it employs full air suspension means the ride is smooth and comfortable,” says Rhodes. “We run our Econics for seven years and experience has proved that they’re built to stand this test of time. In the past, it’s always been the bodies that have started to fail before the chassis, so we’re looking forward to seeing how these new CPD Titan compactors perform over the lives of the vehicles.”

You will find hundreds of new and used Mercedes-Benz trucks for sale on Truck Locator, including a large selection of Actros, Arocs, Atego, Axor, and Econic models.