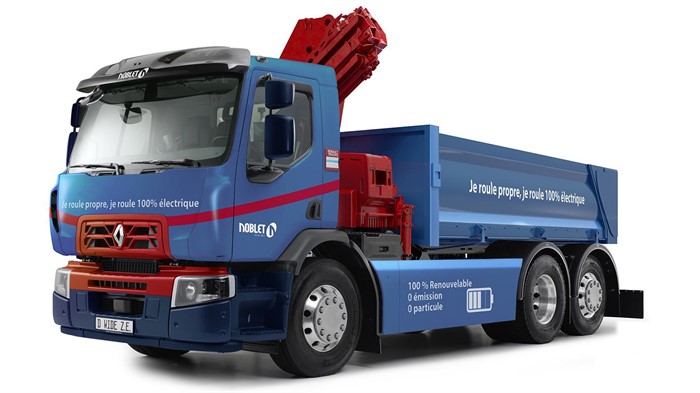 The batteries can be recharged in under two hours with a rapid charger and in less than 10 hours using standard charging. It’s also possible to perform a one-hour partial charge to get an extra 15 to 20 kilometres (9.3 to 12.4 miles) of range in a pinch.

Renault points out that the electric truck’s low noise levels and zero emissions make it ideally suited for work in urban and suburban areas. And while the crane and tipper previously relied on a diesel engine for power, they can now run quietly and with zero emissions like the truck itself.

"Some clients in certain cities in the Paris region, for specific worksites, will be ready to pay more for equipment that is mainly carbon-free and, above all, silent,” says Noblet Group CEO Laurent Galle.

Noblet also receives support from the French Government, nearly €100k ($215k) in fact, for this purchasing decision, something that Renault Trucks Head of Electromobility Andrew Scott says the Government should make note of for truck buyers in the UK and Ireland.

“Recent changes to the Plug-in Vehicle Grant by the UK Government fail to recognise the key part incentives can play in increasing the uptake in electric vehicles,” Scott says. “If we want to see electric vehicles adopted in sectors such as construction, it will be critical that we have the support of Government in properly valuing the benefits which fully electric vehicles can bring to our city streets.”

Find Your Next Renault Vehicle

You will find a large selection of new and used Renault trucks and vans for sale on Truck Locator, including Range C, Range T, Midlum, and Premium vehicles.