IVECO Partners With ENGIE & Vulcangas To Bring Biomethane To Turin 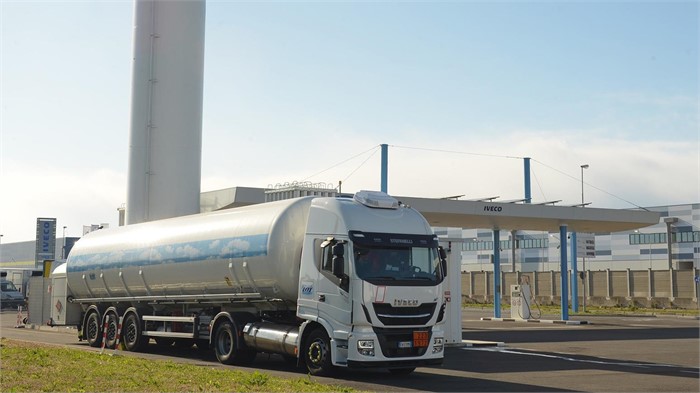 The first Bio-LNG (Liquefied Natural Gas) and Bio-CNG (Compressed Natural Gas) filling station has been established in Turin, Italy, thanks to a partnership between IVECO, ENGIE, and Vulcangas. LNG reduces particulate matter by 95%, nitrogen dioxide by 90%, and significantly reduces carbon dioxide emissions compared to diesel, LPG, or traditional fuels. The new filling station is located on Strada delle Cascinette and was inaugurated in February 2020; it recently filled the tank of an IVECO S-WAY NP truck with bio-LNG to become the first station in Northwest Italy to supply biomethane.

Towards A Green Supply Chain

The biomethane is produced at a plant in the Lodi province. The 5,000-square-metre (53,820-square-foot) station is registered with GSE, the company used by the Italian government to pursue environmental sustainability, and serves as the final link in a 100% green energy supply chain. Its location within the CNH Industrial manufacturing site on Strada delle Cascinette places it in a strategic area east of Turin at the intersection of the transport network where it serves primarily heavy-duty vehicles. The station has two LNG and CNG dispensers and a charging point for electric vehicles powered by a photovoltaic system located on the roof.

"The Process Is Accelerating"

“Zero-emission transport is here,” says IVECO Brand President Thomas Hilse. “With the IVECO S-WAY NP, we have the technology to achieve it and, from today, here we also have the supply of biomethane. The production and supply of this renewable fuel is growing fast, and more stations like this one will quickly come on stream. The process is accelerating and very soon in Italy we will be able to drive completely emission-free on LNG.”

You’ll find a big selection of new and used IVECO trucks for sale every day on Truck Locator, including Daily, Stralis, and Eurocargo models and more.