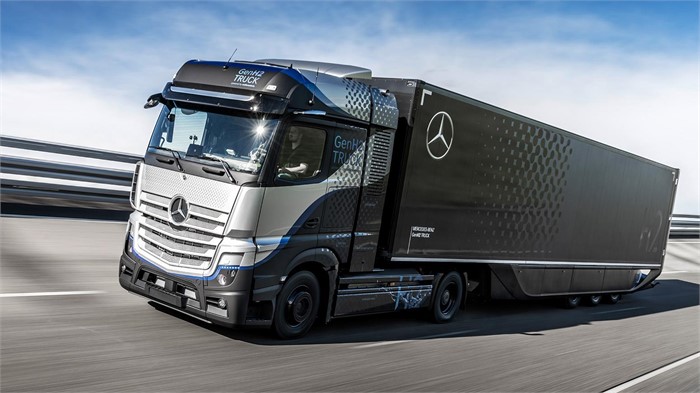 Daimler Trucks recently began testing the first prototype Mercedes-Benz GenH2 Truck, which was unveiled in 2020. The truck runs on a hydrogen-powered fuel cell and Daimler hopes to extend its reach as far as 1,000 kilometres (621 miles) between refills. The tests track vehicle performance, weather and road conditions, and a variety of driving manoeuvres. The truck is expected to be tested on public roads by the end of the year, with customer trials scheduled to begin in 2023. First series deliveries are currently set to begin in 2027.

The GenH2 has a new design with all-new components, including the fuel cell system, all-electric powertrain, and associated systems like the cooling unit. To test the effect of the components’ weight and position in the vehicle, the prototype is loaded with a payload of up to 25 tonnes (27.5 U.S. tons) for a gross vehicle weight of 40 t (44 U.S. t) to be in line with the planned specifications for the truck when it comes to market. The GenH2 will meet the same durability requirements as a conventional Mercedes-Benz Actros, including the ability to handle 1.2 million km (745,645 mi) on the road over 10 years and 25,000 total hours of operation. To date, the GenH2 has covered hundreds of kilometres under continuous load on a road-to-rig test stand and tested real-life operating conditions such as emergency braking and kerbstone drives.

About The Hydrogen Fuel Cell

Liquid hydrogen has a higher energy density by volume than gaseous hydrogen, which allows for smaller and lighter tanks that in turn leave space for more cargo and a higher payload. The truck can also carry more hydrogen for an increased range to enable long-haul transport.

“The hydrogen-powered fuel cell drive will become indispensable for CO2-neutral long-haul road transport in the future,” says Martin Daum, chairman of the Board of Management of Daimler Truck AG and member of the Board of Management of Daimler AG. “This is also confirmed by our many partners with whom we are working together at full steam to put this technology on the road in series-production vehicles. Moreover, considerable momentum is being generated by the clear commitment of national and European regulators to the use of hydrogen for road freight transport.”

You’ll find a large selection of new and used trucks from Daimler brands Mercedes-Benz and Mitsubishi Fuso for sale every day on this site.