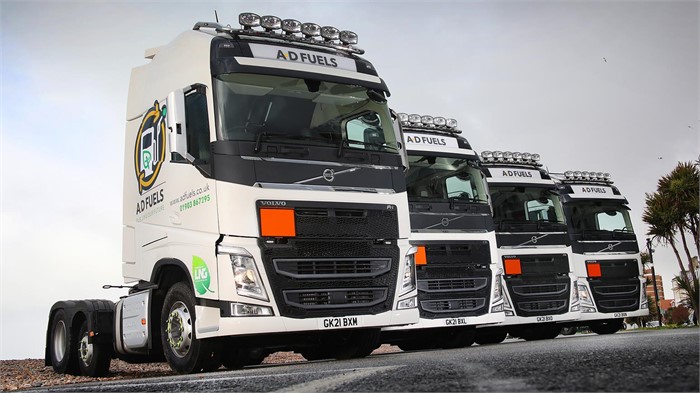 Worthing-based renewable fuels haulier AD Fuels has selected four Volvo ADR-spec Volvo FH LNG 6x2 tractor units for its first LNG trucks. The firm, which hauls for major road transport gas providers, selected Volvo over two other manufacturers following time spent with demonstrators from all three marques. Each truck is expected to cover around 160,000 kilometres (99,419 miles) per year and will operate seven days a week to transport LNG from the Isle of Grain to sites across the UK. The acquisition increases AD Fuels’ fleet to 16 trucks, and that number is expected to grow; the company plans to expand to 13 dedicated LNG tankers along with several moving floor trailers and CNG tankers by the end of 2021.

AD Fuels’ four new trucks were named by pupils from the local Thomas A Becket Junior School who were challenged to propose names with a green theme. The winners received Amazon book vouchers. The names, Sir Gas’Elot, Greenzilla, Eco Eddie and Leafy Luna, have been incorporated into the company’s signwriting. 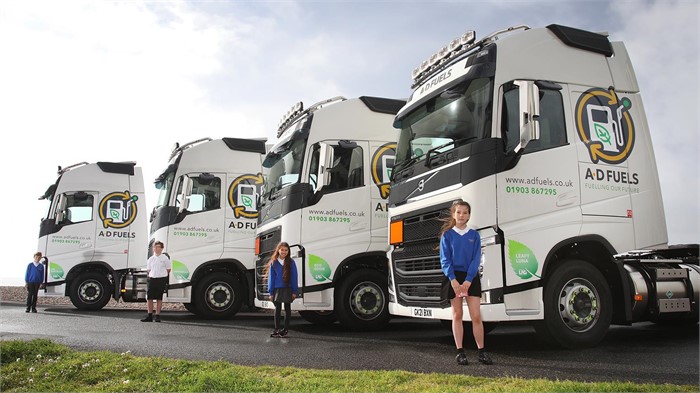 AD Fuels’ four new trucks were named by pupils from the local Thomas A Becket Junior School who were challenged to propose names with a green theme. (Photo courtesy of Volvo.)

The Volvo FH LNG uses small amounts of diesel to initiate ignition of the air-fuel mixture, helping its G13C engine deliver 460 horsepower (343 kilowatts) and 2,300 newton-metres (1,696 pounds-foot) of torque, the same as the truck's diesel-only counterpart. Engine braking also works the same as the regular diesel model without the need for a separate retarder, which would add weight and complexity.

“Demand for LNG is growing exponentially, and we felt now was the perfect opportunity to introduce these trucks into our own operation,” says AD Fuels Director and Head of Transport Jon Mayes. “We’ve seen at firsthand the benefits LNG brings to fleets; and just like them, we wanted to take advantage of running on a cleaner and cheaper fuel too.”

You’ll find a large selection of new and used Volvo trucks, including FH models, for sale every day on Truck Locator.