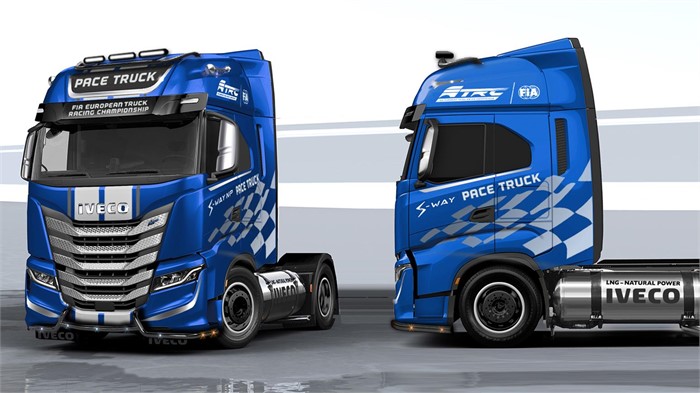 IVECO recently announced it has extended its partnership with the European Truck Racing Association (ETRA) until the conclusion of the 2023 season. The truck maker’s bio-LNG-powered S-WAY NP will be the exclusive pace truck during that period. (Photo courtesy of IVECO.)

IVECO recently announced it has extended its partnership with the European Truck Racing Association (ETRA) until the conclusion of the 2023 season. As an official sponsor, IVECO will be the exclusive supplier of the pace truck for all races in the next three seasons. This season’s pace truck will be the S-WAY NP, the first eco-friendly pace truck with alternative traction at an ETRC event.

About The Pace Truck

The pace truck leads the racers during the formation lap and is used to slow down the race in dangerous situations such as after an accident or in adverse weather conditions. The IVECO S-WAY NP is bio-LNG-ready and provides a significant reduction in nitrogen dioxide emissions and up to 95% less carbon dioxide emissions than diesel-powered trucks. IVECO’s pace truck is equipped with two 540-litre tanks that hold a minimum 390 kilograms of liquid bio-LNG to give the truck a range of up to 1,600 kilometres. The truck also has two yellow rotating beacons, an LED light bar and LED headlights, an illuminated three-piece bull bar, and LED flashers.

The updated pace truck is just one of the ways racing is working towards sustainability. The ETRC is also the first FIA-regulated competition to move to fuel fully generated from renewable sources, using synthetically produced hydrogenated vegetable oil (HVO) fuel in the racing trucks.

IVECO is also the technical sponsor of “Die Bullen von IVECO,” a partnership between the Hahn Racing and Schwabentruck teams. Steffi Halm, the only woman competing in the Championship, will return as the team leader for Schwabentruck. Team Hahn will be represented by Jochen Hahn, a six-time European champion. Reinert Racing and Don’t Touch Racing will also represent IVECO.

“The future of truck racing is without doubt to achieve zero emissions, and the IVECO S-WAY NP pace truck brings that ambition a step closer,” says IVECO Brand President Thomas Hilse. “The eye-catching graphic design and fittings on the pace truck, created by CNH Industrial's Design Center, with official fittings available from the IVECO Accessories Catalogue, means that any driver can design their own great truck.”

You’ll find a large selection of new and used IVECO trucks for sale every day on Truck Locator.