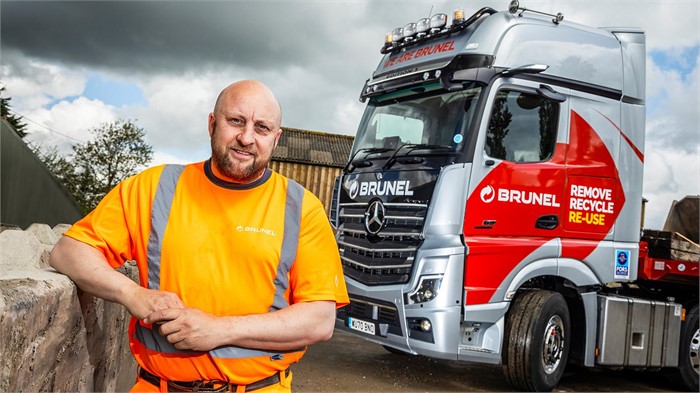 MirrorCam reduces drag and eliminates forward-facing blind spots. The truck’s side mirrors are removed and replaced with compact, roof-mounted cameras. Displays mounted on the interior of the truck’s A-pillars provide the essential views drivers need to maintain situational awareness of their surroundings. MirrorCam also reduces fuel usage as much as 1.5% by improving the aerodynamics of the truck.

“We have a lot of narrow, hedge-lined lanes in this part of the world, so like every other operator down here we’ve always had to contend with a certain amount of mirror damage,” says Brunel Transport Manager Steve Allen. “Being so much smaller and higher, though, the cameras should be a lot less vulnerable to knock-offs. We’ve also noticed that the cameras don’t get anything like as dirty as mirrors do when the truck is working on sites.”

“Our experience of running Mercedes-Benz Trucks over the last six years has been entirely positive,” says Brunel Managing Director Brian Venables. “We’re very proud to be running a fabulous Actros Edition 1 as our first tractor unit. It’s added an extra dimension to our range of capabilities.”

Mercedes-Benz has made just 400 Actros Edition 1 models, and of those only 35 were allotted for sale in the U.K. An aluminium badge on the dashboard reads “One of 400”. The interior of the Edition 1’s GigaSpace cab is done up in black leather with a contrasting topstitching color. The driver can select from eight colours of ambient ceiling lighting. The Multimedia Cockpit of Brunel’s new Actros has an upgraded, 12-inch instrument panel. 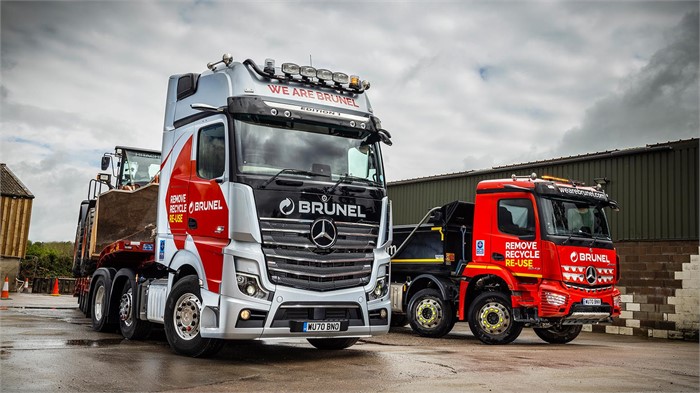 Brunel’s new 8x4 tipper truck is the sixth Mercedes-Benz Arocs in its fleet. “These trucks are tough and reliable, while the ground clearance is excellent, too,” says Brunel MD Brian Venables. (Photo courtesy of Mercedes-Benz.)

External design elements of the Edition 1 include dark headlamp covers and rims, a glossy black grille, and a branded sun visor sporting four extra LED main-beam headlamps. “Everywhere I go, people want to talk to me about the Actros, and to photograph it,” says driver Anthony Ruby.

In the engine bay of the Actros resides a 15.6-litre, inline six-cylinder that produces 625 horsepower (460 kilowatts). “The big engine is a joy,” says Ruby. “I just put it in cruise control and let it do its stuff. I feel genuinely privileged every time I climb up into a vehicle that’s so comfortable it’s like sitting in your front room.”

Actros trucks come factory-equipped with safety technologies such as Active Brake Assist 5. This system uses radar and video imaging to detect pedestrians and moving or stationary objects and can automatically brake the vehicle if needed to avoid accidents.

The Actros also comes with Mercedes-Benz’s updated Predictive Powertrain Control as standard. It shifts the transmission’s gears according to 3D road maps and satellite positioning to improve the truck’s fuel economy by as much as 5%.

Brunel’s new 8x4 Arocs, the sixth in its fleet, is a 3243K model with a steel Predator Ultimate tipping body fitted by Abba Commercials. The truck’s 10.7-litre, in-line six-cylinder engine generates 428 HP (315 kW). The Arocs’ ClassicSpace M-cab is enhanced with the MirrorCam system and the Multimedia Cockpit.

“The Arocs has proved well able to withstand the rigours of our kind of work,” Venables says. “These trucks are tough and reliable, while the ground clearance is excellent, too. That’s a big advantage when we’re working on rough sites and helps to explain why they are so popular with our drivers.”

For new and used Mercedes-Benz trucks for sale, including Actros and Arocs models, visit Truck Locator and use its easy search features.