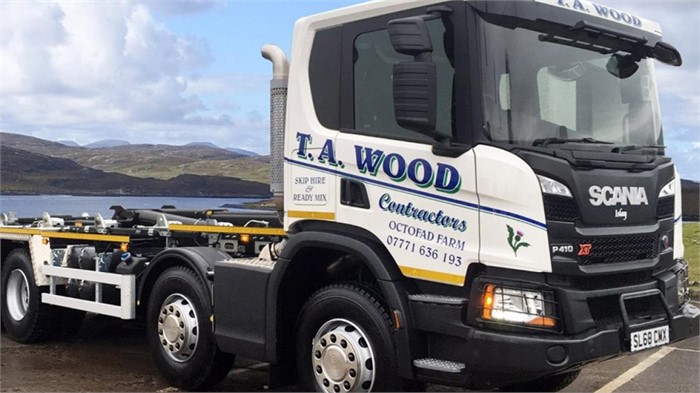 T. A. Wood, a haulage contractor based in Octofad Farm, Isle of Islay, recently purchased an 8x4 Scania P 410 rigid truck outfitted with Hyva hook loader equipment, which, depending on the configuration, can support maximum loads of between one and 30 tonnes. The 32-tonne vehicle also has a 1.7-metre long CP17 day cab, 410-horsepower engine, and an XT specification that makes it well-suited for “operating in arduous environments,” according to Scania. The new model will join an all-Scania fleet that serves customers all across the island.

The Right Tool For The Job

“We're involved in hauling aggregates, delivering ready mixed concrete and general waste management work, all of which sees us operating both on- and off-road,” said Andrew Wood, the company’s owner. “As such, this truck suits our needs well. In addition to being tough and well up the job, it's very good on fuel. The comfort levels are high, and both the driver and I are very pleased with its performance. Over and above that, we're looked after very well by the aftersales team at Glasgow, and that's a key reason why we continue to purchase Scania vehicles, which we've done since we purchased our first back in 2002.”

More About The Scania P-Series

The Scania P-Series is available with a short cab, day cab, or sleeper cab. There are 7-litre, 9-litre, and 13-litre Euro 6 engine options ranging from 220 horsepower and 1,000 newton-metres of torque up to 500 horsepower and 2,550 newton-metres of torque. Other options include 8-speed and 12-speed transmissions, single driven and tandem driven axles, and a range of axle configurations from a 4x2 tractor unit to a 10x4*6 rigid.

There are hundreds of used Scania trucks for sale on TruckLocator, including several P-Series models.