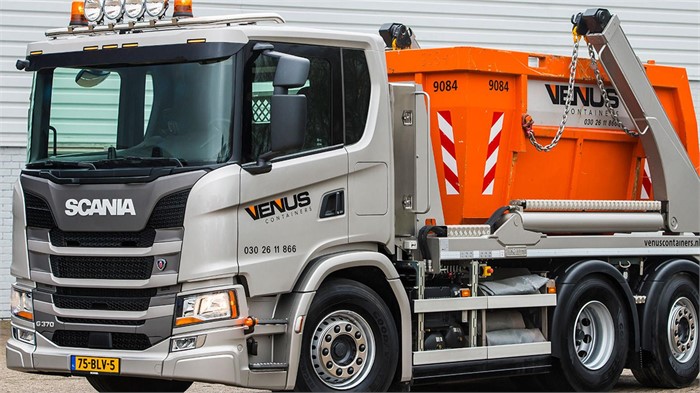 Venus Containers, based in the Netherlands, recently purchased a new Scania G 370 6x2 truck, in part to replace a 15-year-old model that was banned from Utrecht. (Photo courtesy of Scania.)

Venus Containers, a container transport specialist based in Maarssen, the Netherlands, recently added a new Scania G 370 truck to its fleet. The 6x2 model has a 3.15-metre wheelbase that gives it an “ultrashort turning radius,” according to Scania, making it ideal for transporting 10-cubic-metre waste containers on its own or a total of five with a trailer in tow, which can weigh as much as 50 tonnes.

The company opted for a G 370 at least in part due to the need to replace a much older vehicle that “was banned from entering the city of Utrecht,” Scania explains. “We didn’t want to compromise on manoeuvrability,” says Robbert Tammer, owner of Venus Containers. “Together with the dealer, we fitted all the necessary components within this short wheelbase. The result is a truck with the same characteristics as a two-axle vehicle while conforming to regulations. With this truck, we can profitably carry a 10-cubic-metre container full of sand.”

Venus Containers was heavily involved in specifying the Scania G 370 to meet its needs. The truck features a reinforced bumper to protect the grille and headlights. It also has several cameras for eliminating blind spots and improving visibility across the board. Despite the weight of the truck and all of the added features, Tammer says the truck is proving to be fuel efficient, especially when compared to other models in the fleet. “I can see from the weekly Scania Fleet Management reports that the truck is running even more economically than the 4×2 vehicles that we started using last year,” he says. “You can see how quickly developments advance.”

The G-series truck also features a flat roof with a light bar, and Venus Containers notes that the cab is spacious and “looks nicer,” which is important for keeping operators happy. “Good drivers are scarce and several of them are very much in favour of Scania,” says Tammer. “If they want a Scania, there is no reason not to comply. They’re skilled and know what works best.”

There are hundreds of used Scania trucks for sale on TruckLocator, including a large selection of G-series models.