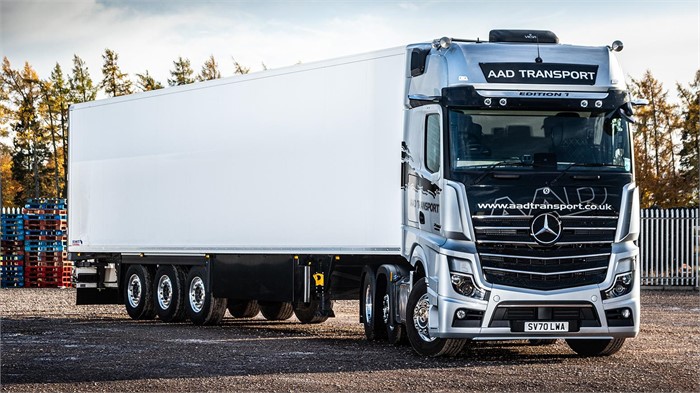 AAD Transport recently acquired a new Mercedes-Benz Actros Edition 1, one of only 400 such models made and one of just 35 available for sale in the UK. (Photo courtesy of Mercedes-Benz.)

AAD Transport, a haulier based in Kirriemuir, recently added a new Mercedes-Benz Actros Edition 1 to its 33-vehicle fleet. The truck is one of only 400 built—and one of just 35 of that were allocated to the UK—and it’s the only vehicle from the German marque in the fleet. It features a GigaSpace cab with gloss black accents on the exterior and four LED main-beam headlamps built into the sun visor. It is powered by a 15.6-litre, 617-horsepower (460-kilowatt) engine.

Other features include Active Brake Assist 5, Predictive Powertrain Control, and the MirrorCam system that replaces traditional mirrors with roof-mounted cameras and A-pillar-mounted displays inside the cab. The MirrorCam system not only improves visibility, but can also reduce fuel consumption by up to 1.5% due to improved aerodynamics.

The Actros Edition 1 benefits from the Sight Package which includes bi-xenon headlamps, a rain sensor, fog lamps, daytime running lights, LED tail lights, and cornering lights. It also features Comfort, Driving, Media, and Stowage Packages, as well as leather and brushed-aluminium accents on the interior that round out the limited-edition standout. AAD also spec’d its new truck with a coffee maker, microwave, home cinema system, and Viesa cab cooler.

The limited-edition truck features several upgrades, including gloss black accents on the exterior, leather and brushed-aluminium accents on the interior, and more. (Photo courtesy of Mercedes-Benz.)

A Special Vehicle For A Special Driver

Although Driver Gordon Taylor has only been working for AAD Transport since 2015, he has quickly made his name as a reliable driver with “a can-do approach,” according to Owner and Managing Director Alan Davie. Interestingly enough, even though Taylor is considered an old-school operator, he has appreciated not only the comfort and luxury of the Actros Edition 1, but also the MirrorCam system.

“My Edition 1 looks fantastic and is a great truck in which to work and spend time away from home,” says Taylor. “I always get a great night’s sleep and couldn’t be happier with it. I’ve found the [MirrorCam] system very natural and easy to get along from the first day I sat in the truck. The more I use it, the more I like it. The cameras and screens provide a very clear view of what I need to see, particularly when reversing or making tight turns with a trailer.” 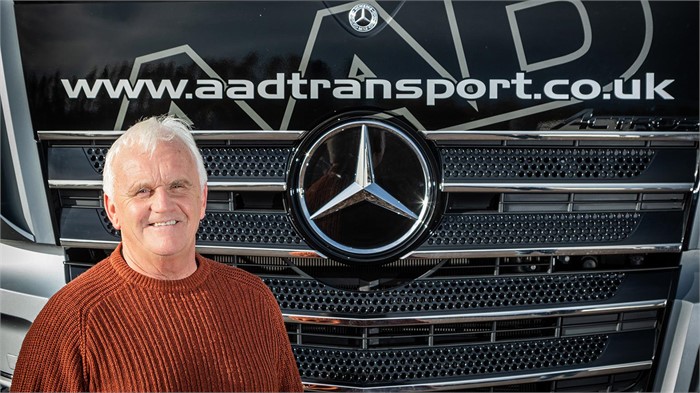 AAD Transport Driver Gordon Taylor appreciates the comfort of the cab’s sleeping compartment as well as the MirrorCam system, which he says he likes more and more as he continues to use it. (Photo courtesy of Mercedes-Benz.)

The fifth-generation Actros, winner of the International Truck of the Year 2020 award, is built for long-distance haulage and heavy-duty distribution. The 18- to 33-tonne truck is available as a rigid or tractor unit with axle configurations ranging from 4x2 to 6x4. There are 17 cab variants in two widths, with roof shape options such as GigaSpace, BigSpace, StreamSpace, ClassicSpace, and CompactSpace. Euro VI engine outputs range from 238 to 625 hp (175 to 460 kW) and from 1,000 to 3,000 newton-metres of max torque.

The Actros’ Multimedia Cockpit combines ergonomic and connectivity refinements that allow operators to drive and live in comfort. Standard safety features include a driver side airbag and the Mercedes-Benz Safety Package, which includes Active Brake Assist with Proximity Control Assist and pedestrian recognition technology.

There are hundreds of new and used Mercedes-Benz trucks for sale on Truck Locator, including a large selection of Actros, Atego, Axor, and Econic models.