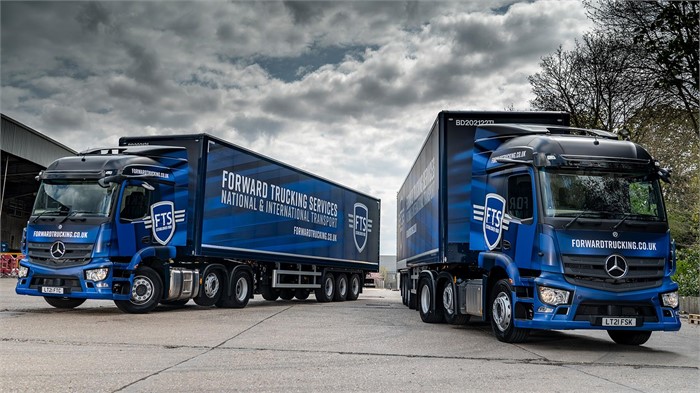 “We’re based on the edge of the M25 and a lot of our work takes us into London, so the fact that the Actros came straight out of the box with a four-star DVS rating weighed massively in its favour,” says Forward Trucking Services Managing Director Pete Samuel. “None of the other manufacturers could match it, and some put forward products with only one or two stars.”

The new trucks are replacing a batch of five-year-old vehicles from another manufacturer, and when investigating replacements, Forward Trucking Services invited dealers from all major brands to submit demonstration models. Over the two-month trial, the Actros demonstrator delivered superior fuel economy while showcasing major savings on AdBlue.

“The Actros returned 13 mpg and above, whereas the vehicles that had been doing the same work were in the high 10s and low 11s,” says Samuel. “What’s more, I reckon we’ll save around £100,000 over the next five years simply because the Actros consumes half as much AdBlue.” 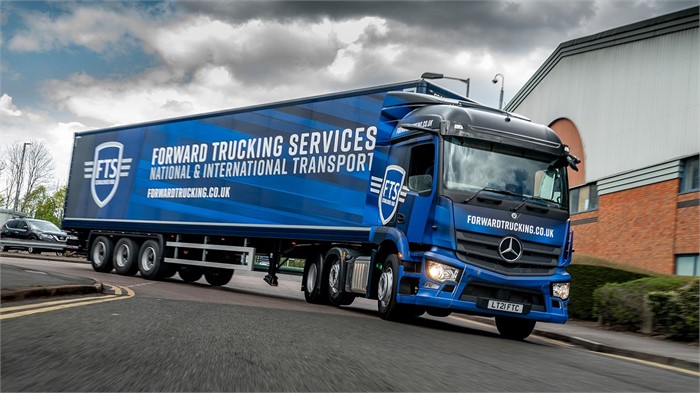 By meeting the four-star Direct Vision Standard, Forward Trucking Services fleet of Actros will be able to work in London now and well into the future. (Photo courtesy of Mercedes-Benz.)

Forward Trucking Services new Actros feature StreamSpace cabs, a design optimised for low fuel consumption, as well as Mercedes-Benz’ MirrorCam technology that replaces conventional, external mirrors with small cameras built into the roof frame for an unobstructed view in the front. The rear-facing cameras send video to screens mounted inside the cab, and these digital rear-view mirrors also pivot to give drivers a clearer view behind the trailer.

The new 2546s are Forward Trucking Services’ first trucks with MirrorCam, says Samuel, who adds, “There was a bit of nervousness initially, particularly from some of the older drivers. We shared the demonstrator around, though, and once they’d got the gist of MirrorCam, and realised how much better the visibility is, they all came to like it.”

You’ll find a huge selection of new and used Mercedes-Benz trucks, including Actros tractors and rigids, for sale every day on this site.