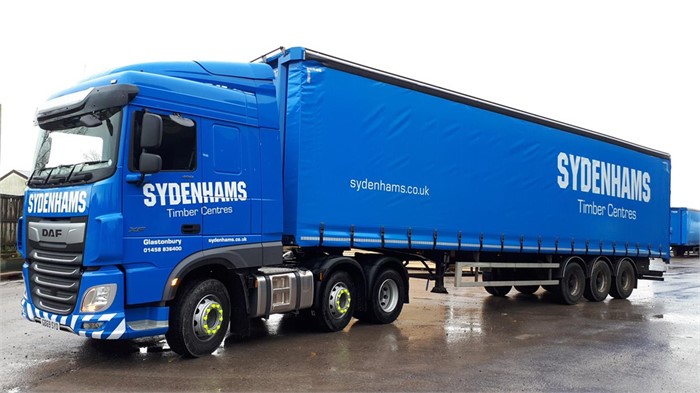 Sydenhams, a timber and building materials supplier based in Dorset that has dozens of branches spread across the United Kingdom, recently added a new DAF XF 480 FTG tractor unit to a fleet that includes a mixture of 58 DAF CF and LF models among vehicles from other marques. The company decided to add the new DAF XF to support a recently opened branch in Glastonbury.

“We supply timber products and building materials to customers across the south and the Glastonbury site will provide a supply link from Penzance to North Wales,” says Jamie Thompson, group transport manager for Sydenhams. “Therefore, there was the need for another tractor unit, we decided upon a DAF XF which would fit for our needs.”

A major selling point of the XF for Sydenhams is the cab, which Thompson says is “very important as we want to look after our drivers.” This particular model features the Space Cab, which is available with several optional features that Sydenhams opted for, including a “flat walk through in the cab, luxury air seat, navigation and phone system, sun visor, and extra comfort mattress,” he explains.

Thompson also lauds DAF vehicles across the board, which he says “have developed very positively over the years.” In addition to improved fuel efficiency, he points to “the change in body shape, more environmentally efficient engines, and a move to more automatic gearboxes, though we still use manual for those tricky terrains with hilly and narrow access” as key upgrades.

There are two cab options for the DAF XF: the Space Cab and the 370-millimtre (14.5-inch) taller Super Space Cab. The XF is available in several axle configurations, including 4x2, 6x2, 6x4, and 8x4 rigid or tractor chassis. Engine options include MX-11 and MX-13 variants that produce between 428 and 530 horsepower (319 and 395 kilowatts) and from 2,150 to 2,600 newton-metres (1,585.8 to 1,917.7 pounds-foot) of torque. DAF also reports that these engines have service intervals of up to 200,000 kilometres (124,274 miles) for a lower total cost of ownership. Among the selection of manual and automatic gearboxes are the 12-speed and 16-speed TraXon automated transmissions, which come standard on new XF models.

You will find hundreds of used DAF trucks, including a large selection of CF, LF, and XF models, for sale every day on TruckLocator.