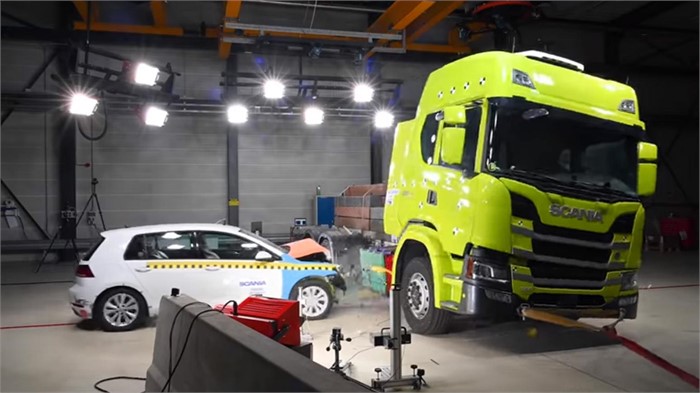 Scania tested the safety of its electric truck in a crash test with a real car. (Photo courtesy of Scania.)

Crash-testing an electric truck differs somewhat from that of a truck with a combustion engine, according to Scania. The company’s R&D department recently completed a full-scale crash test with a real car—rather than a barrier—to test the safety of the critical electric components on Scania’s electric truck in the event of a crash.

“We simulate over and over again, with different speed and angles,” says Scania Head of Mechanical Testing Mikael Littmann. “Simulation is a powerful tool, that is both faster and less expensive than the full-scale equivalent. We base the actual test on the results of our simulations.”

The simulations examine the safety of the entire truck with different parts tested separately. “We adjust the parameters until it’s as perfect a replication of a real scenario as it can be, before we carry out the actual test,” says Jakob Leygraf, test engineer at Scania R&D. 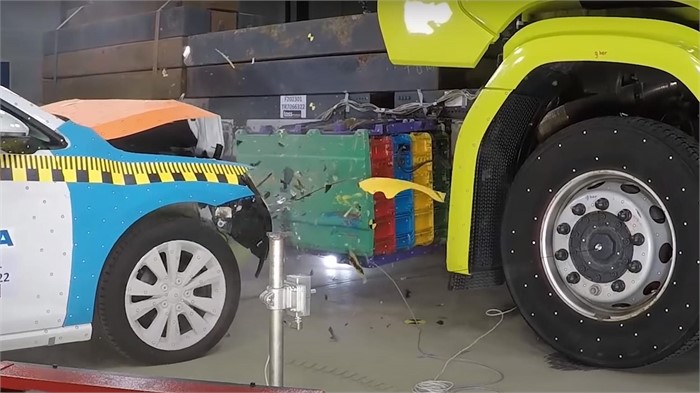 The electric truck’s battery emerged from the test unscathed. (Photo courtesy of Scania.)

Scania indicates that the energy from the impact needs to be distributed and should spread throughout the structure surrounding the battery. The desired impact result is that the electric truck turns the kinetic energy to less critical components. Firefighters stood by as a precaution when the test was preformed, as Leygraf notes, “This is the ultimate test, we do this for real.” Scania posted a video on YouTube that you can watch to see the crash test, which went as expected with the battery emerging unscathed.

You will find a number of new and used Scania trucks for sale on Truck Locator, including new and used G-series, P-series, R-series, and S-series models.