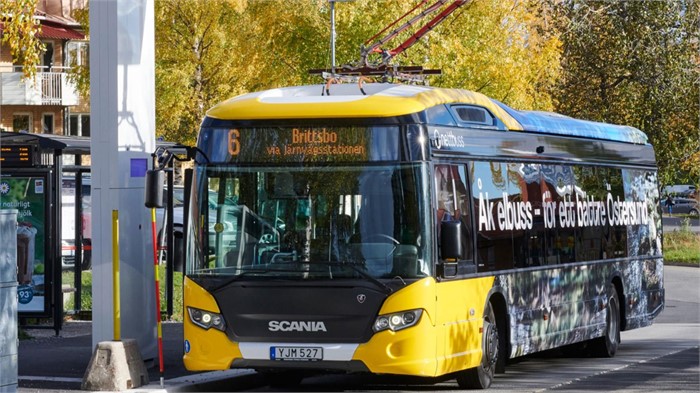 Vy Buss, which serves the city of Östersund, Sweden, and its 64,000 citizens, will add 10 new Scania Citywide LF electric buses to its fleet, starting with seven in July 2021 and adding three more in summer 2022. (Photo courtesy of Scania.)

Vy Buss recently added 10 new 12.3-metre Scania Citywide LF electric buses to its fleet, serving the city of Östersund, Sweden, and its 64,000 citizens. Of the 10, seven will enter operation in July 2021 and the three others will follow in summer 2022. They will join a bus line that extends from Torvalla to downtown Östersund and out to the northern Brittsbo district.

“We were early in establishing a charging infrastructure for electric cars and are now continuing with electric buses,” says Östersund Green Traffic Project Manager Anne Sörensson. “We view this as essential in our aim to become fossil-free and energy-efficient by 2030.”

Vy Buss has been testing Scania electric buses in the field since 2017. Three of those buses alone have covered 120,000 kilometres while transporting more than 300,000 passengers since March 2018. So far, feedback from citizens has been positive, with 78% saying they are “highly satisfied” riding on electric buses and 66% saying their trips are “better or much better than trips with conventional buses.

“This test has been exciting both for us and Scania and we’ve learned a lot,” says Andreas Ehrenborg, technical director at Vy Buss. “The traffic has been running smoothly, regardless if the temperature has been 30 degrees plus or minus. The buses are reliable and electrification has been favourable for the work environment of our drivers and not least for Östersund’s residents. We look forward to continued collaboration with Scania.”

In addition to electric buses, Scania offers a range of Citywide buses that run on diesel, natural gas, hydrotreated vegetable oil (HVO), biodiesel, bioethanol, or biogas. There’s also a biodiesel hybrid option. There are 7- and 9-litre engine options that range from 250 to 360 horsepower (186 to 268 kilowatts). The buses range in length from 10.9 to 18.1 metres. Safety features include disc brakes, electronic brake systems, tyre pressure monitoring, and more.

You will find a number of buses for sale on Truck Locator along with hundreds of new and used Scania trucks, including G-series, P-series, R-series, and S-series models.