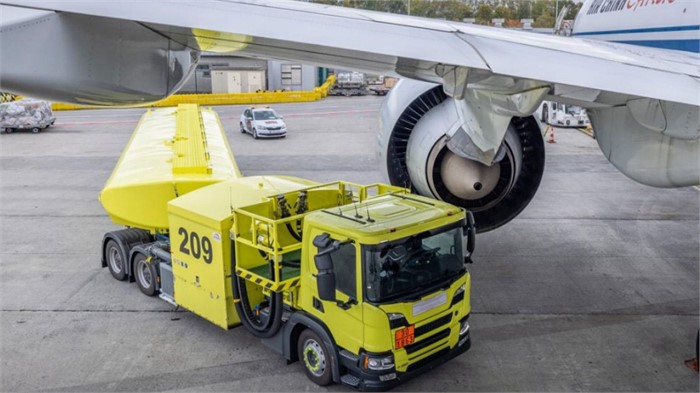 Liège Airport in Belgium recently purchased two new Scania P 320 6x4 fuel tanker trucks. One has already joined the fleet and another will be added later. (Photo courtesy of Scania.)

Liège Airport in Belgium recently ordered two new specially designed Scania P 320 6x4 fuel tanker trucks to add to its fleet, which also includes eight other Scania tank trucks. The new Scanias will replace two older units, and because fuel tanks last three times longer than trucks, they will be coupled with reconditioned tanks. One of the vehicles is already onsite and the other will join it in the next few months.

“The partnership with Scania dates back to 1997,” says Liège Airport Spokesperson Christian Delcourt. “It started for a simple reason: Scania was the only manufacturer able to supply vehicles low enough to fit under the wings of BAe 146 planes which were common here at the time.”

The cargo airport, which is the seventh-largest in Europe, sees as much as 2,500 tonnes (2,756 U.S. tons) of come through on a daily basis. The Scanias will be responsible for refuelling planes, a full-time job considering the airport logs 140 flights per day. With demand continuing to increase, the airport plans to expand its 6,000-cubic-metre (7,848 cubic-yard) fuel capacity by 1,750 m3 (2,289 yd3), which should keep the trucks busy as they enter operation.

The Scania P-series offers options for a short cab, low or normal day cab, or low, normal, or highline sleeper cab. It’s available as a tractor unit or rigid truck with axle configurations ranging from 4x2 to 10x4*6. While well-suited for airport work, P-series trucks can also handle a wide variety of urban applications, including refuse collection, emergency services, and much more. Aiding this is Scania’s bodybuilder portal that significantly streamlines the bodybuilding process.

Engine options for this range include 7-, 9-, and 13-litre powerplants that produce between 220 and 500 horsepower (164 and 373 kilowatts) and from 1,000 to 2,550 newton-metres (738 to 1,881 pounds-foot) of torque. It’s available with an eight-speed range-change or 12-speed range-splitter transmission with options to add Scania Opticruise and Scania Retarder for improved performance. Rounding out the powertrain are single- or tandem-driven rear axles.