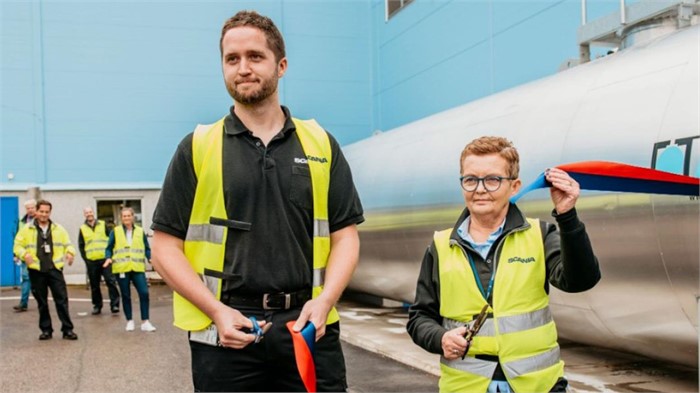 As part of Scania’s commitment to cut its operational carbon emissions in half by 2025, and in accordance with the Science Based Target initiative, the company recently announced that its plant in Oskarshamn, Sweden, is now entirely fossil fuel-free. The facility is responsible for producing roughly 70,000 cabs per year, which are then sent to assembly plants in France, the Netherlands, and Sweden for final truck assembly.

The biggest producers of carbon emissions at the Oskarshamn plant were water drying, power, and seam sealing ovens that originally ran on diesel. The facility has since converted that to rapeseed methyl ester (RME) biofuel, and in doing so, reduced its footprint by 60%. Other ovens responsible for topcoat painting were also converted to run on RME. In addition, the plant’s forklifts have either been replaced by all-electric models or changed over to hydrotreated vegetable oil (HVO).

“The greatest challenge with the RME project was to obtain cost neutrality,” says Pernilla Zackrisson, sustainability manager at the Oskarshamn plant. “Normally, what’s good for the environment is also good for your wallet but in this case it’s more expensive. Despite that, we’ve chosen to implement the project and instead recover the added cost through other energy-saving measures and higher productivity.”

You will find hundreds of new and used Scania trucks for sale on Truck Locator, including G-series, P-series, R-series, and S-series models.