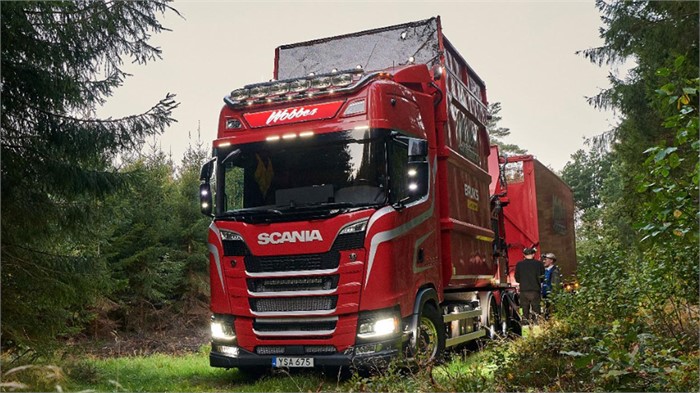 Swedish wood-chipping specialist Wobbes relies on a fleet of Scania trucks, including two 650 S models and one R 580, to keep up with high demand, especially during the winter. (Photo courtesy of Scania.)

Swedish transport firm Wobbes is a longtime Scania customer that started out with a Scania 140 back in the early 1980s. Today, the company relies on two Scania 650 S trucks and one R 580. One of the 650s features a tipper body coupled with a Bruks wood chipper and trailer; another member of the fleet is a dump truck powered by a Scania engine that has been in operation for 25 years.

While Wobbes has roots in farming, it now focuses solely on wood chipping for various forestry businesses and landowners. The company currently has five employees and its services are always in high demand, especially during the busy winter season.

Taking Advantage Of The V8

Wobbes’ Scanias are expected to work hard, loading as many as 30 tonnes (33 U.S. tons) of timber in half an hour or less. The chipper also works hard, chipping as much as much 200 cubic metres (7,062 cubic feet) of branches per hour using the Scania’s power take-off (PTO).

Because the wood chipper is so large and powerful and there is a tipper body and trailer in tow, Wobbes takes full advantage of the Scania’s V8 engine to get the combination in and out of the woods and to run the chipper. All told, the combination is 24 metres (79 feet) long, which Driver Peter Svensson admits makes even a simple turn a complicated manoeuvre, but the trade-off is having the right amount of power and the right equipment to get the job done. 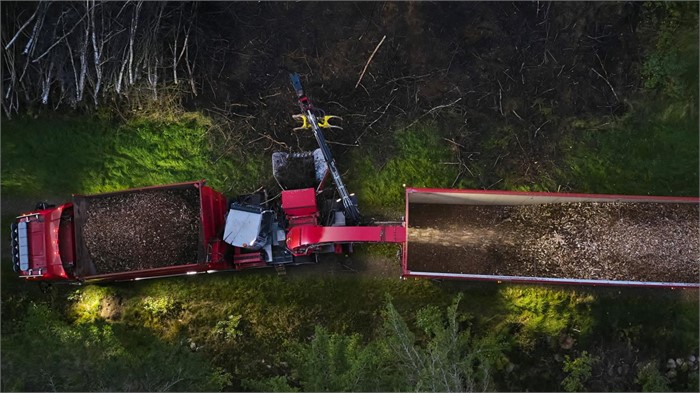 One Scania 650 S features a tipper body and is coupled with a powerful wood chipper and trailer. Wobbes takes full advantage of the V8 engine not only to power the chipper, but also to get the 24-metre-long combination in and out of the woods. (Photo courtesy of Scania.)

“We try to have good equipment and really utilise the full power of the V8,” says Jens Wobbe, the company’s co-manager. “Frankly speaking, we don’t really need the S cab but our drivers could choose and it helps provide more air around the engine for cooling. And it’s nicer to drive. We’ve nearly always had Scania and that’s worked well. We’ve been satisfied and because of that there’s no need to shop elsewhere.”