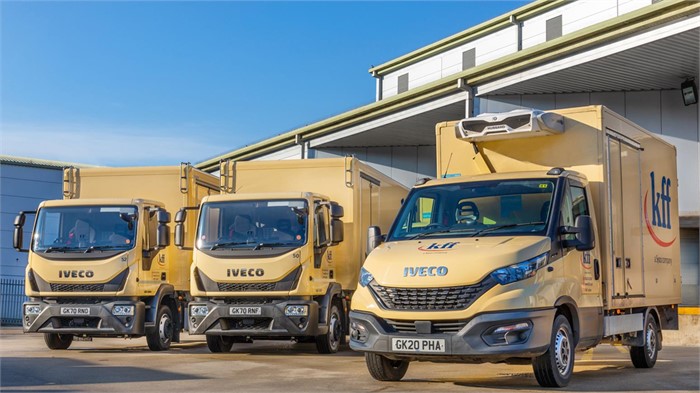 Kent Frozen Foods (KFF), an ambient, chilled, and frozen food transporter based in Aylesford with a distribution centre in Witney, Oxfordshire, recently added 31 new IVECO vehicles to its fleet. The order consists of 13 Eurocargo MLI20E25s and 18 35S12 Daily box vans. KFF has been an IVECO customer for 25 years and currently operates a total of 80 vehicles from the marque.

KFF likes to replace its Eurocargos every eight years or once they reach roughly 500,000 kilometres (310,686 miles) and its Daily vans every five years or when they hit around 400,000 km (248,548 mi). All of its vehicles are covered by Elements 3XL Repair & Maintenance packages, with maintenance and repairs carried out by either Haynes Trucks or M&M Commercials. The package covers standard vehicle serving, driveline maintenance plus electrical, and components prone to wear, including brakes, wiper blades, and light bulbs.

KFF’s new Eurocargos are all 12-tonne (13.2-U.S.-ton) day cabs that will primarily deliver food to cafes, restaurants, and similar businesses across London. The company chose them for this application because they are only 2.1 metres (6.9 feet) wide and can manoeuvre through tight quarters. They feature twin-chamber frozen and chilled box bodies from Solomon Commercials, FRIGOBLOCK refrigeration units, and Dhollandia tuckaway tail lifts rated at 1,500 kilograms (3,307 pounds). They also have one internal and seven external cameras, Hi-Viz red seatbelts, and Verizon tracking units for added safety.

Each of the Eurocargos is powered by a 250-horsepower (186-kilowatt), 6.7-litre Tector 7 engine with IVECO’s HI-SCR passive diesel particulate filtration system. The larger Eurocargo range includes models with gross vehicle weights ranging from 6.5 to 18 t (7.2 to 19.8 U.S. t), engines that produce between 160 and 320 HP (119 and 239 kW), and options for manual or automated gearboxes. 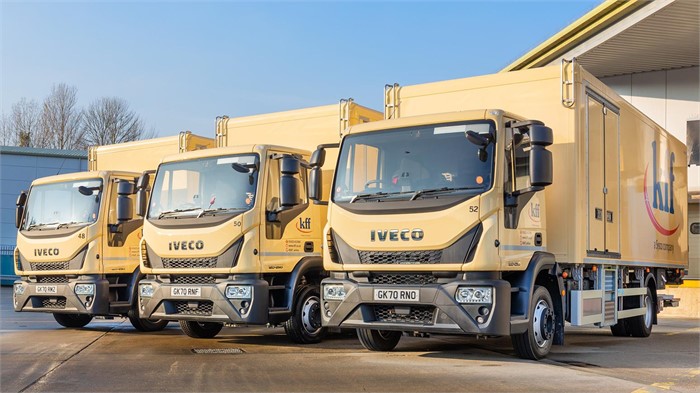 The 12-tonne Eurocargos are equipped with FRIGOBLOCK refrigeration units and 1,500-kilogram Dhollandia tuckaway tail lifts. They will largely be called on to perform urban distribution tasks in London. (Photo courtesy of IVECO.)

“The 12-tonne is the perfect multi-drop urban delivery truck,” says KFF Distribution Manager Jason Windle. “It’s got a good turning circle and drivers like them as they easily take them into places where access is very challenging. The Eurocargo is the perfect size as we rarely work to the truck’s full payload; instead it’s more about optimising load cube on each journey.”

KFF’s new Daily vans will have a bit more ground to cover, as they may be tasked with traveling as far north as Manchester and as far to the southwest as Plymouth. Each of the vans is a chassis cab outfitted with a Solomon Commercials twin-chamber fridge and chilled body, which has a top payload capacity of almost 900 kg (1,984 lbs). They are powered by 120-HP (89-kW) 2.3-L F1A Euro 6D diesel engines paired with six-speed manual transmissions. The Daily range features models with GVWs ranging from 3.5 t to 7.2 t (7.9 U.S. t) with options for 2.3- or 3.0-L engines and six-speed manual, six-speed automatic, or eight-speed HI-MATIC gearboxes.

“Because of the inherent strength of the Daily, they work at maximum payload on the outwork leg of their journeys,” says Windle. “We take them down to the weighbridge to ensure that with a driver and full tank of fuel the vehicle is compliant but working at its optimum weight. We’ve looked at the heavier Daily, but we wanted to stay under the 3.5 t GVW to manage longer trips without the restriction of a tachograph.”

You will find hundreds of new and used IVECO trucks and vans for sale on Truck Locator, including Dailys, Eurocargos, and Stralis models.