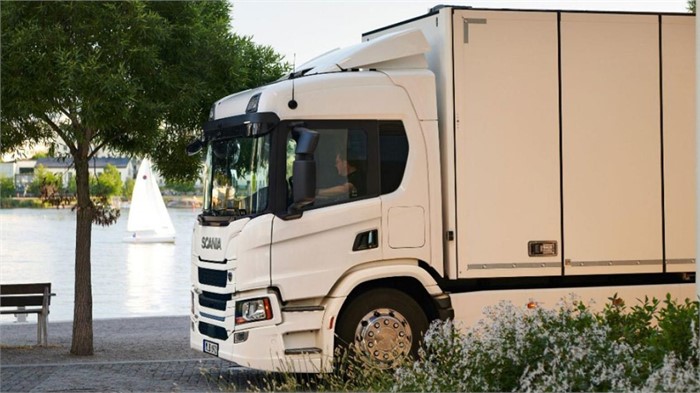 Scania is doubling down on its electric truck efforts, and recently announced it is currently developing a battery-electric vehicle that can support a total weight of 40 tonnes and stay on the road for four and a half hours per charge. (Photo courtesy of Scania.)

Scania has reaffirmed its dedication to producing electric vehicles with plans to build on the recent launches of plug-in hybrid and all-electric trucks in the coming years. In fact, Scania is already working on a battery-electric vehicle that can weigh up to 40 tonnes (44 U.S. tons) with enough capacity to stay on the road for four and a half hours. The vehicle can then fast charge as the operator takes a 45-minute break.

Scania is so committed to sustainability that it believes 10% of its total European sales will be electric vehicles by 2025 and that the figure will rise to 50% by 2030. In order to make that a reality, Scania will focus on improving energy storage capacity, reducing charging times, and making the entire production process more efficient and environmentally friendly. The company has also stated its goal of reducing its own operational CO2 emissions by 50% while reducing CO2 produced by its vehicles by 20%, all by 2025.

“We see that battery-electric solutions are the first zero-tailpipe emission technology to reach market broadly,” says Scania Head of Sales and Marketing Alexander Vlaskamp. “For the customer, a battery-electric vehicle requires less service than a conventional one, meaning higher uptime and improved costs per km or hour of operations. We have learnt from the bus segment, where transformation started earlier and battery-electric options are in high demand. Scania’s timing in that segment was not optimal, however it provided good experiences and we are presently accelerating with the new Scania bus range. It also gave us good base knowledge as we ramp up the electrified truck business.”

Moving Away From Hydrogen-Powered Vehicles

While Scania has produced several hydrogen-powered vehicles, the company says it is moving away from that as a focus for alternative fuel because “three times as much renewable electricity is needed to power a hydrogen truck compared to a battery-electric truck.” The production process for hydrogen-powered trucks is also less efficient and such vehicles, due to their complexity, are also more difficult to maintain. For those reasons, Scania instead believes that hydrogen will be a better long-term solution for storing energy rather than a fuel source for heavy-duty trucks in the future.