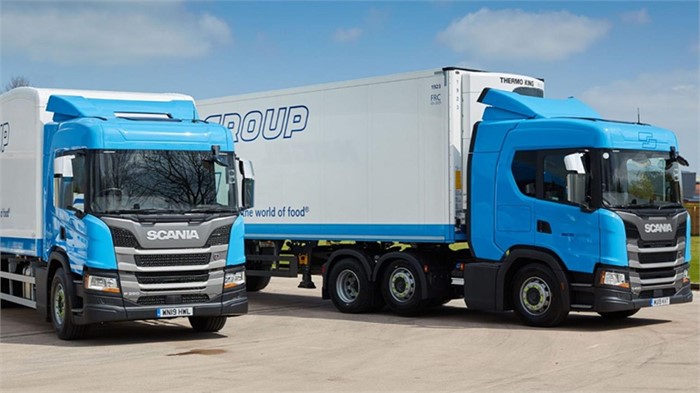 Nagel Langdons recently put in an order for 205 Scania trucks, including G-Series, P-Series, and R-Series models. (Photo courtesy of Scania.)

Nagel Langdons Limited, a refrigerated and frozen food distribution specialist based in Bridgwater, Somerset, recently put in a large order for 205 Scania trucks, which will be delivered by Scania (Great Britain) Limited in 2019 and 2020. The order consists of rigid trucks and tractor units from popular Scania lines, including the G-Series, P-Series, and R-Series, and they will operate at the company’s eight depots across the United Kingdom.

“Scania has been part of the Nagel Langdons fleet for many years and our decision to specify them as our primary make for 2019/20 is based on product quality, reliability, and the consistently high levels of aftersales support we receive from the Scania network,” said Tyrone Lanaway, engineering manager for Nagel Langdons Limited. “In addition to meeting our operational repair, maintenance and servicing requirements, Scania doesn’t shy away from older vehicles, which is something we particularly appreciate. Our depots report their Scania [trucks] consistently run for the full six weeks between inspections without issue, which is exactly what an intensive operation such as ours demands.”

Scania will deliver 67 trucks to Nagel Langdons in 2019, followed by the rest in 2020. Of the initial 67, 56 are tractor units, including G 450 6x2/2 models with normal height roofs and R 450 6x2/2 models with Highline cabs. They all have 44-tonne gross train weights and feature mid-lifting axles. The G-Series models will be used for general distribution work as well as trunking between depots and the R-Series trucks will operate as trampers. The remaining 11 rigid trucks are P 280 6x2 models with 26-tonne gross vehicle weights and sleeper cabs. They feature seven-litre engines that produce 280 horsepower and 1,200 newton-meters of torque.

Ongoing Support & A Glimpse Into The Future

All of new Scania trucks are backed by two-year repair and maintenance contracts, and Nagel Langdons plans to keep them in the fleet for four or five years. The company is currently evaluating a Scania P-Series truck with a seven-litre, 220-horsepower engine, and is looking into the Scania L-Series as well. “I was out in the L-Series recently, and the high levels of visibility it affords means it's now a top contender for urban operations,” Lanaway added.

You’ll find hundreds of Scania trucks for sale on TruckLocator, including many new and used Scania G-Series, P-Series, and R-Series trucks.