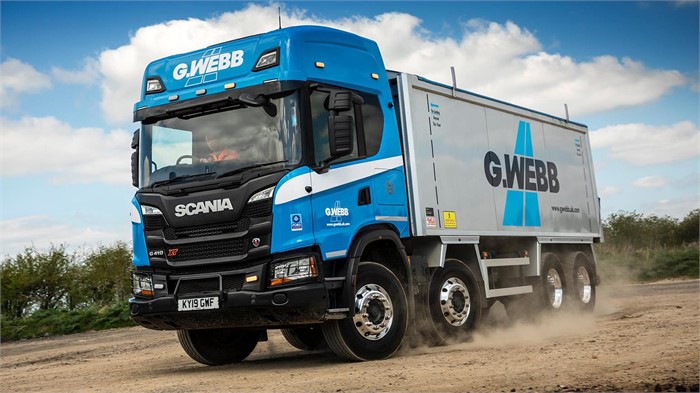 G. Webb Haulage Limited, a bulk haulage specialist based in Longstanton, Cambridgeshire, recently purchased six Scania P-Series and six G-Series models, all of which are new generation trucks configured as tippers. The P 410 XT tippers have day cabs and Charlton Bodies Limited tipping bodies, while the G 410 XT models have Aliweld Limited bulk tipping bodies. All of the vehicles have the same 13-litre DC13-141 engine, which produces 410 horsepower and up to 2,150 newton-metres of torque. The P-series trucks will handle quarry work and recycling, and the G-series trucks will transport sewage sludge and contaminated waste.

“We have been introducing more and more Scanias into our fleet since they launched their Euro 6 engines in 2011,” said David Webb, joint-managing director of G. Webb. “The previous range was excellent on fuel, but the new generation is nothing short of fuel-fantastic. We would expect around 8 to 8.5 mpg on the kind of work we do, but our new generation Scanias are returning more like 9.5 to 10 mpg—they make a case for themselves on that basis alone. Over and above that, driver acceptance is another factor; ask any of our drivers what they would like to drive and Scania is always high on the list, usually at the top.”

More About The P-Series & G-Series

The new generation P-Series and G-Series trucks are both available with short cabs, day cabs, or sleeper cabs. The P-Series has options for 7-litre, 9-litre, and 13-litre Euro 6 engines that offer between 220 and 500 horsepower and between 1,000 and 2,550 newton-metres of torque. The G-Series has options for 9-litre or 13-litre Euro 6 engines, which produce between 280 and 500 horsepower and from 1,350 to 2,550 newton-metres of torque.

There is a large selection of used Scania trucks for sale at TruckLocator, including several Scania P-Series and G-Series models.