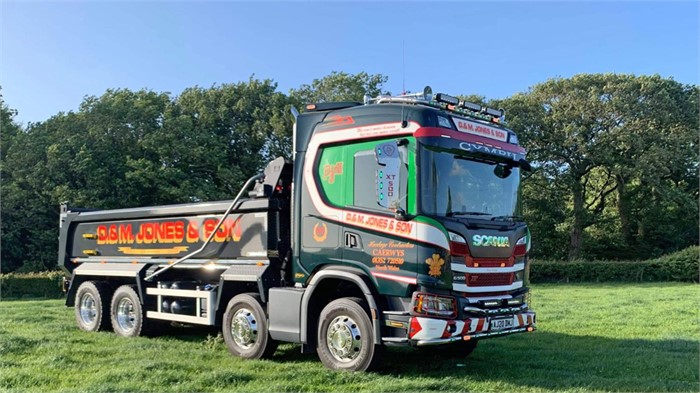 North Wales-based D&M Jones & Son relies on their trucks to support the tipper hire business, but also to grab the attention of potential customers while out on the road. Each of the trucks in the fleet, including a recently added Scania G 500 XT, sports an eye-catching livery that the company works carefully to preserve with a wipe down at the end of the work day and a full cleaning on a weekly basis. D&M typically keeps their trucks in operation for five years.

“All our nine trucks are styled along the same lines. It’s a matter of personal pride but they are also eyecatchers along the road and widely photographed. That makes good advertising for us. I like to run tidy trucks,” says Arwel Jones, owner of D&M Jones & Son. “We invest quite a bit in our trucks but we’ve found that pays off in residual value. We’ve had other brands through the years but have lately gone over to Scania because the service we get is absolutely amazing. I can’t fault it in any way.”

Scania’s XT series is built to handle challenging applications and terrain. That’s why the G 500 XT is ideal for D&M Jones & Son, which often sends its trucks into landfills and other similar sites. This specific model features a 13-litre Euro 6 engine that produces 500 horsepower (373 kilowatts) and 2,550 newton-metres of torque; it is also equipped with a Scania Opticruise transmission with a fully automatic clutch.

Truck Locator has well over a thousand new and used Scania trucks for sale, including a large selection of G-series, P-series, R-series, and S-series vehicles.