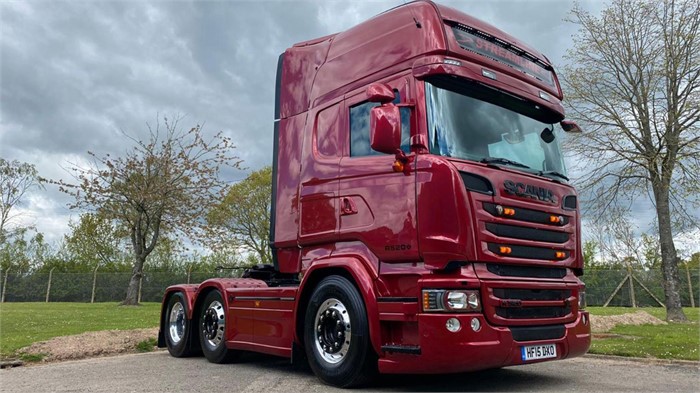 Simon McMahon recently purchased a used 2015 ruby red Scania R 520. Although it has covered 500,000 kilometres, McMahon says truck is in “very good condition” and the interior of the cab is “nearly pristine.” (Photo courtesy of Scania.)

Simon McMahon recently purchased a used Scania R 520 truck for his fledgling haulage operation, but he is no stranger to the brand, noting that he “learned driving trucks in a Scania” and although he has “driven several brands over the years,” he is a big fellow and has “found that there’s more legroom in a Scania.” McMahon has been driving and operating tractors, potato harvesters, and other farm machinery for around 27 years for a major potato grower, according to Scania.

The farm will continue to employ him as a driver and for that, he will help out on the farm during the eight-week harvest period, at which time his son, Tyler, will take over driving the truck. Tyler, who is 19 years old, is currently working toward earning his tractor-trailer driving license. “He’s been with me in the truck since he was old enough to climb the steps,” McMahon says.

A Big Step Up

McMahon raced RC cars when he was a teenager and has always had an interest in cars and trucks, including his Audi RS4, the Scania R 520 marks a considerable step up in terms of size and colour. The ruby red R-series truck features a V8 engine, and although it’s a model year 2015 vehicle that covered 500,000 kilometres in its time, McMahon says “it was in very good condition, nearly pristine in the cab.” The striking paint job is not only a stylistic choice, but also a tribute to McMahon’s father, whose favorite colour was red.

Truck Locator has hundreds of new and used Scania vehicles for sale, including popular models from the company’s G-Series, P-Series, R-Series, and S-Series.