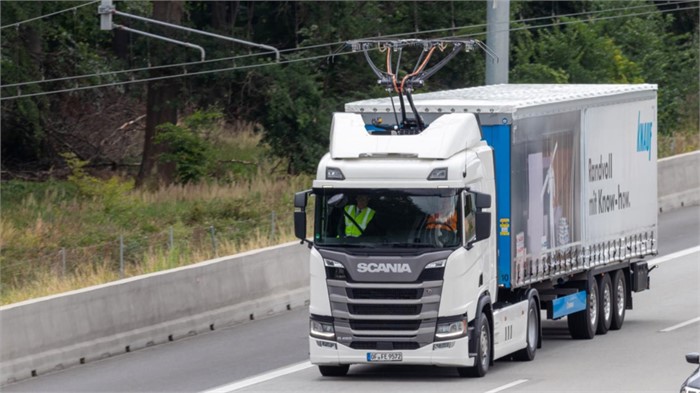 There are now five Scania R 450 hybrid trucks operating along a 5-kilometre electrified stretch of the A5 motorway near Frankfurt, Germany. Each truck features a pantograph connected to overhead catenary lines that provide electricity. (Photo courtesy of Scania.)

Knauf, a construction materials provider headquartered in Iphofen, Germany, has been operating one of five Scania R 450 hybrid trucks on a five-kilometre electric test track located near Frankfurt since July, with Contargo, Merck, Meyer Logistics, and Schnaz running the other four vehicles. Contargo started participated in the program in June.

All five trucks feature roof-mounted pantographs that connect to overheard catenary lines that provide electricity. The goal of this project, according to Christoph Dorn, managing director of Knauf Group, is to “provide insights that can help us make our logistics processes even more sustainable, especially in metropolitan areas.”

The 5-kilometre test track on the A5 motorway in Germany isn’t the only one of its kind in the country, as one was established on the A1 in Schleswig-Holstein in late 2019 and another will open on the B462 in Baden-Württemberg in late 2020, in what is expected to be the final trial. Now that all five of the R 450 hybrids are out on the road, Scania says that several studies will begin collecting data to examine the benefits of e-roads.

“A 5-km test track in both directions on the motorway may seem very short, but the aim is to test the technology,” says Heinrich Kerstgens, co-managing director of Contargo. “If the feedback is positive, and if about one-third of the German motorway network is equipped with electrified catenary lines, in future approximately 80% of the heavy trucks registered in Germany will be able to operate in an electric mode using this technology. That will make a really significant contribution to reducing carbon emission.”

You will find more than a thousand new and used Scania trucks for sale on Truck Locator, including a large selection of G-series, P-series, and R-series models.