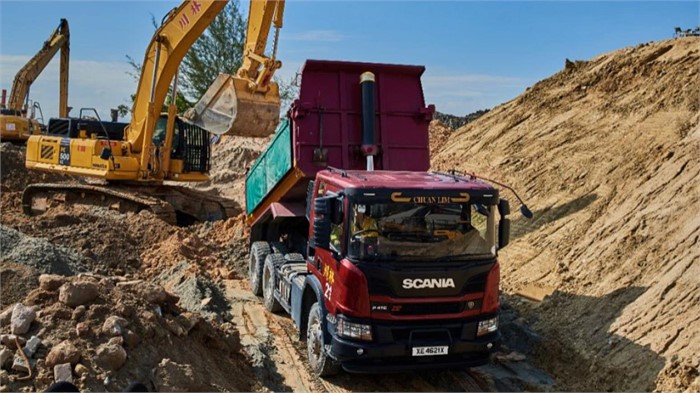 Singapore-based Chuan Lim Construction has added 18 Scania P 410 tipper trucks to its fleet over the past year, citing their high performance, reliability, and cab comfort. (Photo courtesy of Scania.)

Chuan Lim Construction, a Singaporean company that specialises in general building, civil engineering, demolition, cable and pipe laying, and road reinstatement, recently added another Scania tipper truck to its roughly 200-vehicle fleet. It’s the 18th Scania P 410 Chuan Lim Construction has purchased in the last year, and the company has 40 other, older Scania tippers in operation, as well.

These vehicles are specifically designed to tackle difficult driving conditions that come along with the occupation, including hilly off-road worksites, muddy paths, and more. They are also safe, allowing the operator to survey the load from a side inspection step before unloading gravel and other materials.

The company relies on its vehicles to perform a wide range of tasks, which makes uptime a priority, so it took Scania’s “whole service package into consideration when making a purchasing decision,” says Lim. For that reason, the construction specialist opts for Scania repair and maintenance packages as well as its fleet management solutions, driver training and coaching services, and more.

“We wanted a tipper truck that would be fuel-efficient and economical to operate,” Lim says. “But we also look at how strong and durable the components are to work under the stress of very rugged conditions. The new Scania XTs have given us an extra-tough truck to handle the demands of the job. It also gives us better fuel economy, compared to other European brands of trucks, which contributes to lowering our operating cost and environmental impact.”

In addition to the P-series, Scania G-series and R-series trucks are also well-suited for use as tipper trucks, as is the XT range that is designed to stand up to even the most challenging job conditions. The G-series cab, for example, is available as a day cab with a normal roof for a comfortable work environment and, like the P 410, features a side body step for safely checking the load. The Scania XT range features a one-piece steel bumper, extra protection for headlamps and mirrors, and a towing capacity of 40 tonnes (44 U.S. tons).

These Scanias are also a fit for a wide of other construction applications with the ability to be configured as mixers, hooklifts, concrete pump trucks, skip loaders, mobile crane tracks, flatbeds, heavy haulers, and much more.