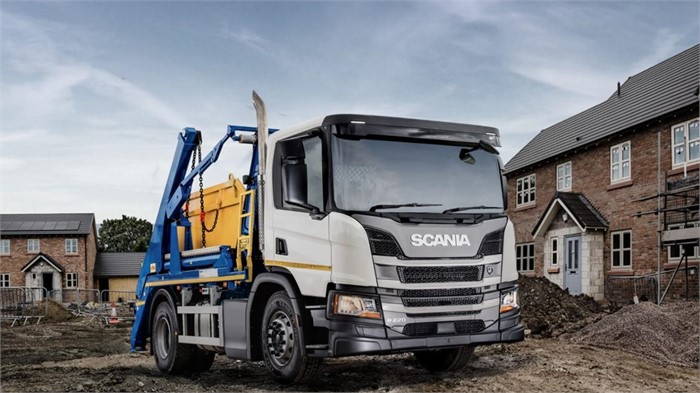 Scania’s new Skiploader model is based on a P-series chassis and sports Hyva’s HG20120XL bodywork. (Photo courtesy of Scania.)

Scania recently released a new P-series model that comes preconfigured with Hyva NG2012XL skip loader bodywork. The Scania Skiploader is available with either a 7-litre engine or a 9-litre engine that produce 220, 250, 280, 320, or 360 horsepower, depending on the specific model. You also have a choice between a standard day-cab or short day-cab. Other features include an eight-speed Scania GR875 range-change automatic transmission, front and rear steel suspension, a R660 rear axle with differential lock, and Standard, Economy, and Off-Road performance modes.

“The New Generation P-series 4x2 rigid chassis is ruggedly-constructed, durable, reliable and safe,” says Andrew Jamieson, sales director at Scania (Great Britain) Limited. “In addition to its highly fuel efficient on-road performance, the P-series provides a stable and sure-footed platform when working on-site. As such, it provides an ideal base for skip loader operation. By combining with Hyva we have a vehicle that is not only tailor-made for its application, but also offers the convenience of a one-stop, cost-effective product which can be acquired and fully maintained with Scania as the sole source of supply.”

The NG2012XL skip loader body has telescopic arms and jack legs that can be controlled independently. It also features a rapid off-load function that makes it easy to drop off multiple empty containers. It has a maximum lifting capacity of eight tonnes when extended and 12 tonnes with the arms retracted. The entire truck comes standard with a two-year repair and maintenance plan, but Scania provides extended protection plans as well.