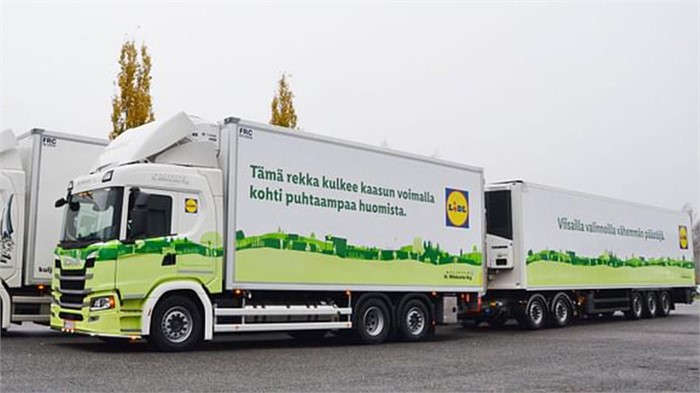 Transport Harri Mikkola specialises in food transport, and using compartment partitions, the trucks can carry up to four food groups, requiring different temperatures, on the same trip. The delivery trucks can include frozen goods and fruit and vegetables at +14 degrees. The Finnish haulier recently switched to a liquefied biogas-powered Scania G 410 that features a hybrid temperature control system in the tractor unit. And while the temperature control systems are traditionally powered by diesel, the Scania G 410 can use hybrid power and further cut emissions and reduce fuel costs.

“This is Finland’s first hybrid temperature control system in a tractor. While the engine is running, the system is powered by a generator installed in the engine, which means that it runs on electricity,” says Transport Director Teemu Mikkola. “Fuel consumption for the temperature control system has also decreased. It previously required about two litres an hour, but now we’ve reduced that by at least one litre.”

The same delivery route that earlier was carried out with a 500-horsepower (372-kilowatt) diesel truck is now operated with the biogas-powered Scania G 410 with total weight ranging from 40 to 60 tonnes (44 to 66 U.S. tons).

“That is sufficient and shows that you should select the right power rating for the transport assignment,” Mikkola says. “We drive 400 kilometres in one day, so the truck is refuelled every other day. Usually there is still 20% left in the tank. We were a little worried about refuelling beforehand, but it has gone smoothly.”

You’ll find hundreds of new and used Scania trucks for sale every day on Truck Locator, including a huge selection of G Series trucks like the G 410.